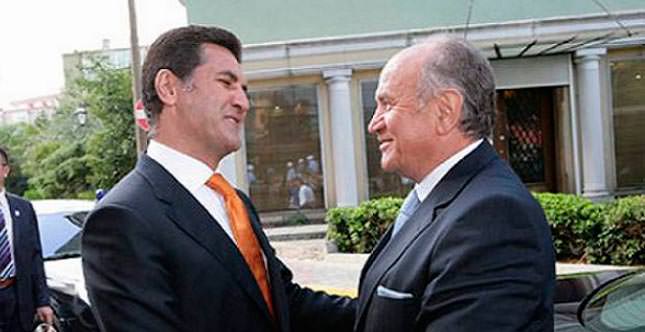 Ahead of the local elections on March 30, the Objective Research Center conducted a survey in critical Istanbul districts to illustrate the intensity of the competition between party candidates. Interviewing residents, Daily Sabah took the pulse of public opinion in Istanbul's districts

ISTANBUL – Istanbul, Turkey's largest city, constituting its heart in terms of the economy, culture and history, is preparing to elect its mayor on March 30. The results of a survey conducted by the Objective Research Center (ORC) indicate that Istanbul's critical districts will see a closely contested election and have the biggest share in electing the mayor of Istanbul.

One of Turkey's most reliable research institutions, ORC announced the results of the poll conducted in Istanbul. The results indicate that public opinion has not shifted since the 2009 local elections, and apart from several districts, general voting trends have not seemed to change.

He said: "The AK Party is expected to hold its current districts. Some changes are possible on the Anatolian side of Istanbul such as in the districts of Maltepe and Kartal. The AK Party may have the upper hand in those districts."

According to the ORC poll, which surveyed 2,310 persons in the district of Esenyurt, AK Party candidate Necmi Kadıoğlu, who was elected with 42 percent in 2009, is expected to increase his votes to 45 percent. Main opposition Republican People's Party (CHP) candidate Çetin Çapan follows the AK Party candidate with 32.5 percent. While 9.7 percent of those surveyed are expected to vote for the Peoples' Democratic Party (HDP), only 6.2 percent are expected to vote for the Nationalist Movement Party (MHP).

Of the 1,255 surveyed in Beşiktaş, general voting trends seem to be broken to a certain extent. While the voting for current CHP Mayor İsmail Ünal was 68.5 percent in 2009, Beşiktaş residents' votes for CHP candidate Murat Hazinedar are expected to decline to 51.9 percent in the upcoming elections. Hazinedar is expected to be followed by AK Party candidate Z. Abidin Okul with 26 percent. MHP candidate Burhan Akdağ seems to lag far behind in the mayoral race at 7.1 percent.

The Maltepe district of Istanbul will experience a tight race between AK Party and CHP candidates, according to the ORC poll. Out of the 2,080 surveyed, 42 percent are expected to vote for CHP candidate Ali Kılıç, whereas 38.4 percent are expected to vote for AK Party candidate Edibe Sözen. Considered to be one of AK Party's fortresses in Istanbul, Beyoğlu seems likely to continue to vote for the AK Party, even though the CHP nominated Aylin Kotil, ex-wife of CHP Istanbul municipality candidate Mustafa Sarıgül, is in hopes of winning. Of 1,600 surveyed in Beyoğlu, A. Misbah Demircan is expected to be re-elected with 36.5 percent, while Kotil is expected to receive 31.9 percent. MHP candidate Osman Gür is likely to receive just 10.5 percent of the votes.

Üsküdar, a large, densely populated district on the Anatolian side, is another fortress that is expected to again support the AK Party in the elections. Of the 2,100 surveyed, AK Party candidate Hilmi Özkan is expected to increase his party's votes from 37.9 to 41.5 percent in Üsküdar. CHP candidate İlhan Özkes is expected to follow at 32.9 percent. MHP candidate Habib Suiçmez trails behind in the mayoral race for Üsküdar with 7.8 percent. The CHP's Şişli district fortress where Mustafa Sarıgül has been the long-time mayor seems to suffer from Sarıgül's Istanbul municipality candidacy. Leaving the CHP about 10 years ago and transferring to the Democratic Left Party (DSP) due to an internal rivalry in the CHP, Sarıgül returned to the CHP and is running for mayor of Istanbul. According to the ORC poll, CHP candidate H. Hayri İnönü, who is supported by Sarıgül, is expected to receive 37.8 percent of the votes, while AK Party candidate Mukadder Başeğmez is expected to receive 32 percent, increasing its votes from 18.7 percent. One of the most controversial districts of Istanbul, Sarıyer, will experience the tightest race between the AK Party and the CHP. Since the mayoral races started to flare-up, Sarıyer has been in the middle of a dispute. In February, the CHP grabbed attention because it delivered its candidacy list to the Sarıyer District Electoral Office after the deadline.

Contradicting its previous decisions, the Supreme Electoral Council of Turkey (YSK) decided on the continuity of CHP's candidacy in the district. A victory gained in Sarıyer in the local elections is the issue of concern in Istanbul these days. According to the poll, the candidates are expected to be in a tight race. The poll indicates that CHP candidate Şükrü Genç will receive 37.5 percent of the votes, while AK Party candidate Sedat Özsoy is expected to receive 36.1 percent. MHP candidate Ahmet Özyürek seems to be out of the race with 15 percent.

Regarding the upcoming elections, Daily Sabah interviewed residents in Istanbul districts. Gaye Aydıner, who lives in Üsküdar, said: "I will vote for the AK Party because I am afraid that if other parties win, my security, fundamental rights and freedom will be limited as they had been in the past. My other concern is that while the AK Party, during its election campaigns, talks about its future projects to serve nation, the other parties seem focused only on taking out Erdoğan's party to assume the power. Opposition parties are more involved in black propaganda against the current government rather than putting forward their plans and projects for a better Turkey."

Selin Kurtulan, a woman living in Başakşehir, said that she will vote for the AK Party and noted, "I would like to see stability in my country; that is why I believe the AK Party will serve the nation and maintain a democracy that got rid of military tutelage."

Merve Suskun, a woman from Kadıköy, said: "I will vote for the CHP because there is no other option. The government has been in power for a long time, and there is a need for change in the country."

* Names have been changed.