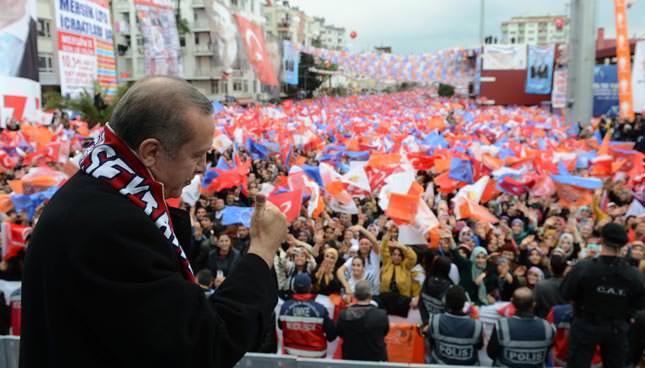 Prime Minister Erdoğan, speaking to supporters in the southern city of Mersin, projected the AK Party is increasing its 38.8 percent support to between 45 and 50 percent in the March 30 local elections

ISTANBUL – Prime Minister Recep Tayyip Erdoğan spoke on Thursday about the current state of affairs in the country during a television program on Turkey's Channel 24. Expressing confidence that his party would win 50 percent of the vote in the upcoming municipal elections, Erdoğan stressed he is confident that he has the support of the people.

In reference to the Gülen Movement, the prime minister said that the situation in state institutions has become uncontrollable as the Gülen Movement has even infiltrated the state's intelligence agency, degrading trust with the government. "No matter how many inspections you make, the ones who conduct the inspections are also instruments of the movement," said Erdoğan. He went on to note that the recent developments actually have a beneficial dimension as they revealed the real agenda of the Gülen Movement and gave the government a chance to "clean the viruses" within the Turkish state.

According to Erdoğan, the Gülen Movement has been preparing for over 30 years to take over the government by placing members in state institutions, but on the of account good relations, no action was taken against the government prior to last year.

Erdoğan also expressed his disappointment with those who blamed the government's closure of prep schools for the actions of the movement.

Stating that he would never give the movement a second chance to make up for the damage they have caused, Erdoğan claimed the movement utilizes lies, libel, sedition, plots and deception for religious purposes and is involved in a defamation campaign against the government. On the matter of the 13th High Penal Court's rejection of the legislation abolishing Specially Authorized Courts and releasing a number of individuals charged under high-profile cases such as Ergenekon coup attempt case, Erdoğan stated that such developments demonstrate the degree of infiltration by agents of the Gülen Movement and the judges should be held responsible for rejecting the lawmaking body of the country.

Erdoğan also touched on the recently revealed widespread wiretapping activities and remarked that the government is obliged to protect citizens from being illegally wiretapped by agents of the Gülen Movement.

Adding that they will no longer be able easily wiretap people, he condemned the movement for assigning "imams" in all levels of state institutions. "We thought imams only worked at the mosque" said Erdoğan. He also demanded that people do not refer to them as a religious community and stated that communities are involved in beneficial work whereas the Gülen Movement is involved in casting curses to the government and causing chaos.

At his most recent election campaign rally in Mersin, Erdoğan confidently stated ahead of upcoming elections and said he is ready to leave as chairman of AK Party if the part loses and invited Kemal Kılıçdaroğlu, the leader of main opposition Republican People's Party (CHP) to do the same.

He pointed to the partnership between opposition parties and the Gülen Movement and asked the Nationalist Movement Party (MHP) if they were ashamed of cooperating with the Revolutionary People's Liberation Party/Front (DHKP-C), a leftist terrorist organization which has launched attacks against Turkish security forces and carried out targeted killings.

Erdoğan also condemned Fethullah Gülen and his media outlets for provoking people to take part in demonstrations and cause unrest while he also criticized the CHP on their poor management of the city of Mersin. The city does not even have a city square where such rallies can be held, and expressed that the AK Party will continue to follow productive policies and provide services to the people and resolve all issues through legal procedures rather than violence. The prime minister also promised to extend the high-speed train system to Mersin, Adana, Osmaniye, Gaziantep, Şanlıurfa and Mardin by 2023.