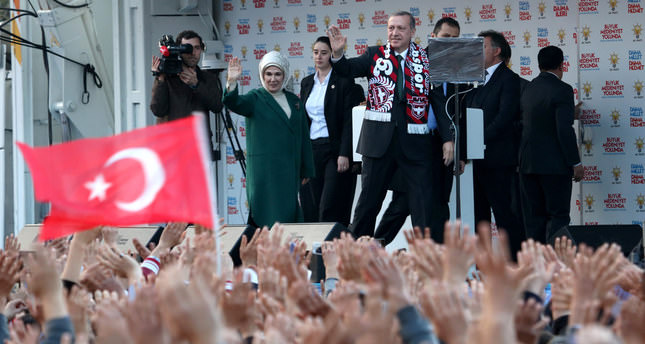 by Mar 15, 2014 12:00 am
ISTANBUL – Prime Minister Recep Tayyip Erdoğan addressed crowds in the predominantly Kurdish southeastern province of Batman and one of the most industrialized cities, Gaziantep. He made remarks concerning the Gülen Movement, headed by controversial imam Fethullah Gülen, the movement's infiltration of state institutions and violation of the privacy of prominent individuals. He criticized Gülen over his call to women to remove their hijabs during the Feb. 28 coup. He touched on allegations that Gülenists make black propaganda against the government and their pressures on their following to vote for either of the two opposition parties - the Republican People's Party (CHP) or the Nationalist Movement Party (MHP). Erdoğan touched on the ongoing peace process with the Kurdish people and emphasized that no there have been no deaths from either side since the process began. He said: "In the 'old Turkey,' Kurdish people were prohibited, obstructed and ignored.

Yet, in the 'new Turkey,' we have stopped the bleeding. We will further peace in Turkey." Kutbeddin Narlı, a resident of Batman, said that it was the most crowded AK Party rally in Batman he has ever seen. According to Narlı, the AK Party will increase its votes in the city. Yet, voters living in rural areas always vote for the Peace and Democracy Party (BDP) despite any improvement made by the government. He added that the AK Party's efforts for peace are not communicated to the people in a proper way, while the BDP portrays itself as the only party endeavoring for peace.