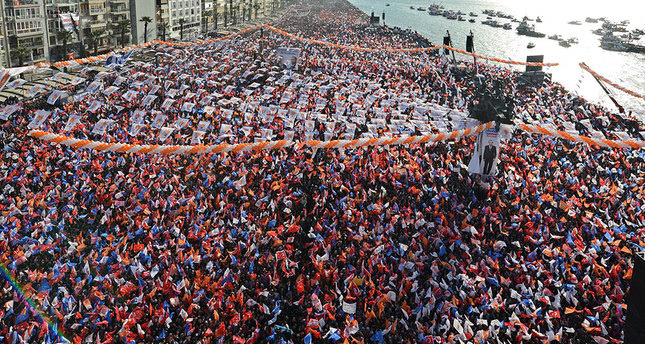 Prime Minister Recep Tayyip Erdoğan addresses huge crowds of supporters in İzmir, seen as a stronghold of opposition CHP, and calls on the people to "help us save İzmir." AK Party İzmir mayoral candidate Binali Yıldırım is slowly closing the gap with incumbent Aziz Kocaoğlu

ISTANBUL – After an election rally in Manisa, a city in the Aegean region of Turkey, Prime Minister Recep Tayyip Erdoğan yesterday addressed followers in İzmir, one of the largest cities in Turkey, ahead of upcoming local elections on March 30.

When Erdoğan took the stage the crowd chanted "Turkey is proud of you" at Gündoğdu Square in İzmir. Touching on the significance of adhering to national will and democracy in the country, Erdoğan referenced former Prime Minister Adnan Menderes, who was in power during the 1950s and was executed after the May 27, 1960 coup. He said that the Gülen Movement, has infiltrated the police and judiciary, aiming to overthrow the Turkish government as was done in the May 27 coup.

He also accused the main opposition Republican People's Party (CHP) of allying with the Gülen Movement, and said, "Turkey will respond those attacks at the ballot box on March 30." "Turkey's 81 cities say they do not want to ignore my will, my party and my government. You elected it [the government] and you will decide when it leaves," said the prime minister.

Erdoğan highlighted İzmir's long-continued municipal issues. He stated that İzmir's Republican People's Party (CHP) leadership has not taken the steps necessary to develop İzmir and has allowed the city to be mired by problems related to trash collection and transportation. He vowed to strengthen the municipality's approach in the city and said AK Party's İzmir mayoral candidate Binali Yıldırım will support the city and be a remedy for İzmir's municipality issues.

The city known as a stronghold of the centerleftist CHP but with its 2,787,000 registered voters there, the AK Party could surpass CHP for the first time in İzmir. There is currently an unprecedented tight race between the CHP and AK Party with the latter significantly closing the gap and surpassing CHP.

According to a recent poll conducted by MAK Consultancy and Research Firm, the AK Party's candidate Binali Yıldırım is leading ahead of elections in İzmir with 44 percent, while CHP's Aziz Kocaoğlu is projected to receive 43 percent.