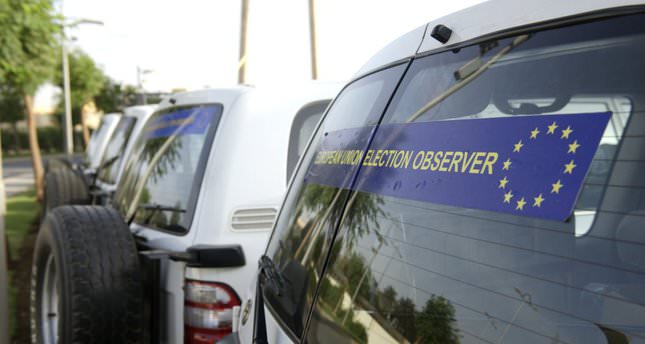 Elections in Turkey have a history of being free, fair and transparent and international observers are welcome to monitor voting on March 30, say top officials

ANKARA – Turkey switched to a multi-party system in 1946 after years of singleparty rule under the Republican People's Party (CHP) for 23 years. Since the switch, Turkey experienced elections with the participation of several political parties.

Compared to Western countries, Turkish voters have always been more interested in the elections.

Turkish elections have also been notably free and fair, with no reports of vote stealing or multiple balloting except during the 1946 elections when the Democrat Party appeared to have outdone the CHP.

Eighteen members of the European Parliament, led by Dutch member of the European Parliament Marietje Schaake, sent a letter to EU High Representative Catherine Ashton and Commissioner Stefan Füle requesting permission to establish an EU election observation mission to monitor municipal elections in Turkey, scheduled for March 30. In the letter Schaake stated that the Turkish government recently introduced a number of laws that restrict freedom of expression and the EU needs to promote free and fair elections as a precondition for Turkish democracy. Ankara responded to the request positively and Turkish media outlets reported that Prime Minister Recep Tayyip Erdoğan announced that EU observers could visit the country during local elections. "Of course, representatives of our party will secure the necessary calm environment in polling stations. I do not think there will be problems... if they wish, let them come. There are no obstacles before them," Erdoğan remarked in response to a question concerning security during elections.

Turkey's EU Minister Mevlüt Çavuşoğlu also weighed in on the matter. "As Turkey we don't have any concerns regarding international election observers.

They can come and monitor the election if they want to," he said. Çavuşoğlu, who is also the former president of the Parliamentary Assembly of Council of Europe, one of the leading institutions that provides election observation missions, added, "Turkey has got a good record on elections. The Council of Europe and Organization for Security and Co-operation in Europe (OSCE) observed the previous elections in Turkey and reported that elections were free and fair. I am confident that this election will be the same."

General elections in 2011 were observed by the OSCE and Council of Europe, with the organization saying, "Turkey's well-managed, democratic elections demonstrated pluralism."

In addition to international organizations, citizen organizations also monitor elections in Turkey. The most common type of domestic election monitoring comes by way of party poll-watchers, who are party members that are looking out for the interests of their party.