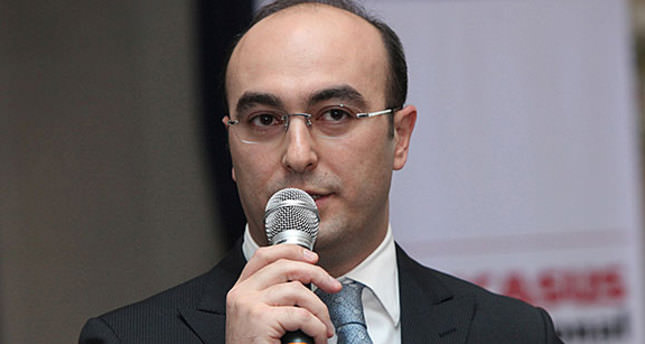 Fearing infiltration by the Gülen Movement into state institutions, previously noted in U.S. documents leaked by Wikileaks, Azerbaijan sacks a top official as the first step of a wider investigation into the group

ISTANBUL – Former head of the Azerbaijani Presidency Political Analysis and Information Department Elnur Aslanov has been sacked by Azerbaijan's President İlham Aliyev without any public explanation. An email allegedly belonging to Aslanov was leaked to the press on March 16, declaring his loyalty to U.S.-based controversial imam Fethullah Gülen, who commands an opaque organization trying to infiltrate the Turkish and Azerbaijani state.

Aslanov has since said he does not have ties to the Gülen Movement and announced that the letter was fabricated. Daily Sabah could not reach Azerbaijani officials based in Istanbul and Ankara to receive a statement over the dismissal despite numerous calls and emails.

Azeri dailies Musavat and Azadlik published another letter signed by Enver Özeren, the manager of a school named Çağ Öğretim, and described him as a leading member of the group, which controls a large number of private schools and tutoring centers.

The letter, which was published on March 3, 2014 was complaining about a government purge of Gülenist-affiliated officials in the intelligence service. According to Musavat, the names involved with the Gülen Movement included Ferhad Mehmmedov, the head of the Strategic Investigation Center Elman Abdullayev, spokesman of Interior Ministry Ceyhun Osmanlı and Fuad Muradov, a senior member of the parliament.

A document published by Wikileaks showed that the U.S. government is well aware of Gülenist activities in Azerbaijan. "Çağ Öğretim - a private Turkish company in Baku - oversees one university (Khazar University) and at least 12 secondary schools in Azerbaijan. The Gülenist network has also developed links to several Azerbaijani media outlets and a local Turkish business association. While the Azerbaijani government is generally hostile to foreign Islamic influence, representatives of Gülen have negotiated a good relationship with the government insiders, which appears grounded in the broader context of the close bilateral relationship between Azerbaijan and Turkey," read a confidential diplomatic telegram dated August 5, 2008 sent by the U.S. Embassy based in Baku.

According to the document, government insiders are willing to send their children to Gülenist schools on account of its advanced educational services. Elnur Aslanov's name was also cited in the telegram as the movement's "younger face at the Apparat." It is believed that the Azerbaijani government wanted to clamp down on the Gülen Movement in the country as part of a broader anti-Sunni campaign, but Prime Minister Tayyip Erdoğan intervened on behalf of the Gülen Movement during a meeting with the President Haydar Aliyev in 2008. Now times have changed. Several ministers in Turkey are now questioning the legitimacy of the movement and accuse them of plotting a coup against the government by using their power within the police force and the judiciary. The removal of Aslanov supports the belief that the Azerbaijani government is also planning to move against Gülenists.

Güner Özkan, an academic focusing on Azerbaijani foreign policy and regional issues from the Ankara-based International Strategic Research Organization, said that the schools belonging to the Gülen Movement might be closed in the near future. He said, "The Azerbaijani government is very suspicious about this kind of religious movement. They are always ready to take action. If they close those schools, it would not be surprising at all." Özkan indicated that the current climate concerning the Gülen-led movement in Turkey is affecting the Azerbaijani government and society due to interdependent economic relations, shared culture and mutual history.