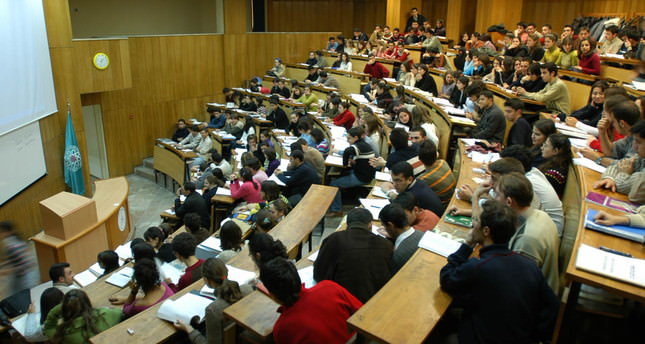 ISTANBUL – Turkey's university system experienced a crucial series of developments in the past 10 years aimed at improving higher education in the country. Known for the inefficient and unfair system through which students must pass to enter the institutions and the inadequate number of universities, the country failed to provide students with the education they long demanded.

The insufficient amount of universities failed to meet the high number of students. In 2002, the total number of universities countrywide was 76. This number climbed up to 175 after 2013 with the establishment of 99 new universities, 51 of which are state-owned and 48 of which are private and belong to foundations. Currently, there is a university in each city, unprecedented in the country. The state appointed a total of 105,933 staff for 51 universities, and currently there are a total of 1,431 faculties along with 574 institutes and 896 vocational schools. The number of academic staff also experienced a surge of 72 percent to 130,653 in 2013 from 76,090 in 2002.

According to Günay Durmuş, a member of the Executive Board of the Council of Higher Education, Turkey has significantly leapt forward in terms of education and even surpassed the United Kingdom with 70.11 percent in terms of gross enrollment, and China in terms of the number of students enrolled in open universities. As part of the efforts to improve universities and academic learning in Turkey, the government introduced a series of reforms. It was during the AK Party government that Turkey exhausted the biggest portion of the budget on education in the history of the Republic as spending surged from TL 7 billion to TL 34 billion. While it was prohibited to conduct research in universities in any language besides Turkish, regulations were changed to allow the use of common languages spoken in Turkey and research in different languages and dialects. New regulations also allowed the establishment of non-Turkish language institutions and elective language courses at universities. Significant progress was achieved in terms of increasing the monthly student bursaries from TL 45 in 2002 to TL 300 in 2013, for a total of 740,462 undergraduate and graduate students who also receive daily stipends of around seven liras for buying food. Student housing has also been improved, with 344 dormitories in 81 cities providing housing to 303,795 students.

The school contribution points required to enter universities, implemented following the Feb. 28 coup attempt, were removed along with the elimination of coefficient discrepancies between vocational secondary schools and regular secondary schools when entering university in order to provide a level playing field for all students. On the other hand, the elimination of the hijab ban at universities allowed millions of girls to attend school without compromising their religious beliefs, whereas before they were forced to choose between their hijab and education.

University students seem to have a positive outlook regarding the current situation as standards of education improve. Neslihan Kurt, a student of international relations at Galatasaray University, said more people are leaving their apolitical tendencies and becoming actively involved. "People are holding demonstrations and the atmosphere seems politically charged, whereas they used to be apolitical before," said Kurt, who emphasized she does not think that the recent events will have a significant impact on the upcoming local elections as most people vote for ideology rather than performance. Another student of international relations at Galatasaray University, who preferred to remain anonymous, said that students expect to be valued as individuals and want the government to increase the participation of youth in civic affairs. He also pointed to the idea that people ascribe special meaning to the local elections as they will have an impact on the next general and presidential elections. Higher education in Turkey is consistently improving with significant progress achieved in the past decade.

Currently, there are efforts to abolish the university entrance exams, one of the reasons for the closure of prep schools which have become a psychological and financial burden on students and their families.