TV ads open a new chapter in the electoral campaigns 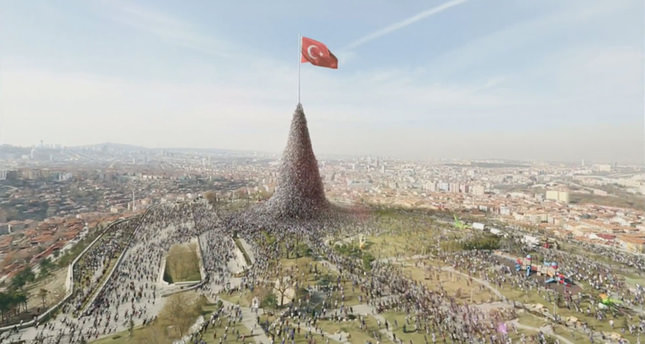 ISTANBUL – Electoral campaign strategies in Turkey have advanced significantly with the use of innovative TV commercials on a large scale. Parties, including the AK Party and the Republican People's Party (CHP), have reserved air time as part of an effort to encourage people to go to the ballot box. Political communication analysts suggest such extensive election campaigns have not been put to use previously in the country's political history. The AK Party and CHP's TV ads differ in many aspects but they also feature a few common characteristics.

While the AK Party's campaign revolves around a positive message and atmosphere, the CHP's campaign ads focus on the "shortcomings" and "mistakes" of their opponent. For instance, the AK Party TV ads portray a number of citizens who are satisfied with the current state of the country and express that they have good reason to re-elect the AK Party.

The ads were filmed in different regions of the country and presented projects that have been completed by the AK Party government including public housing projects, mortgage opportunities for the underprivileged, infrastructure initiatives throughout the country to build roads, tunnels, transportation initiatives such as the Marmaray undersea railway, the abolishment of the hijab ban, significant improvements in the healthcare system and development in the country's underprivileged east.

Contrary to this, CHP's ads mostly aim to discredit their opponent rather than present their own projects. The ads refer to the current government's shortcomings, mistakes and how the AK Party government has allegedly "divided" society, in an attempt to encourage people to vote for the CHP to re-unite the country.

In an exclusive interview with Daily Sabah, Mehmet Murat Pösteki, the president of the Objective Research Centre (ORC), evaluated a number of recent TV ads. According to Pösteki, both parties tried to convey their messages through different means with the AK Party, framing their campaign in an inclusive manner, whereas the CHP focused on negative campaigning and criticized the government. "The AK Party's target audience is extremely comprehensive," said Pösteki, who noted they have successfully used the right strategies and gave the right message whereas other parties fail to reach such wide audiences as their messages are mostly focused on a small group.

He also touched upon the point that in the past five years, there have been persistent efforts to create an atmosphere of distrust and the AK Party attempts to respond to this in their campaigns and express that they do not discriminate against anyone and that Turkey is a strong country. "They especially focus on the southeastern part of the country in their ads in response to the defamation campaign to discredit the government's work in the region" according to Pösteki. He also stated that the latest ads have received praise from all sides of the political spectrum and members of other parties have criticized their own leaders for not coming up with such strong campaign messages.

Commenting on the use of women wearing hijab in both parties' TV ads, Pösteki noted that the CHP intentionally uses such figures in order to gain votes and that they were not genuine as is evident by the remarks of Doğan Taşdelen, a CHP parliamentarian at a press conference earlier this week -he stated that their "battle" is a war between Islam and secularism.

The AK Party's most recent TV ad aired on March 18, the day on which the 1915 Gallipoli Victory is commemorated nation-wide. A film director who preferred to remain anonymous stated that the ad had a powerful message as it entailed the symbolic bringing down of the Turkish flag by an unidentified actor at a park, felt by people from all walks of life, who went on to stop the lowering of the flag with the recitation of Turkey's national anthem in the background by Recep Tayyip Erdoğan. The director noted the ad makes allusions to Gezi Park, where wide-scale protests were held last summer. The prime minister, on the other hand implies that he needs the help of the people to stop perpetrators from harming the nation.

The most explicit emphasis was on the people's collective action to repulse the enemy and save the nation, which is represented by the Turkish flag in the ad. Municipal elections on March 30 are considered as crucial as general elections since the country is experiencing political tremors in the aftermath of the Dec. 17 operation - allegedly orchestrated by the Gülen Movement, which has been accused of trying to establish a parallel state within Turkey's governmental institutions. Extra precautions have been taken prior to the elections to monitor the voting process in efforts to prevent rigging.