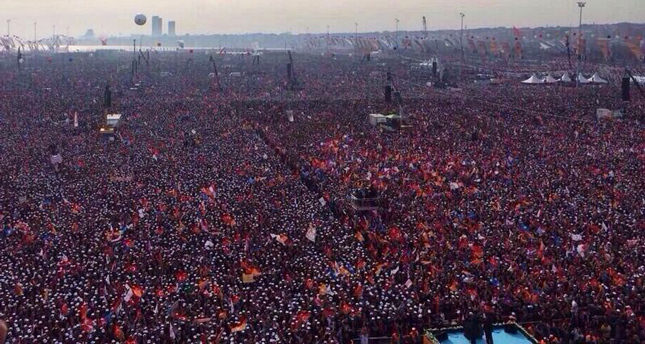 Ahead of the local elections on March 30, Prime Minister Recep Tayyip Erdoğan held one of the largest election rallies Istanbul has ever seen

ISTANBUL — Turkish Prime Minister Recep Tayyip Erdoğan addressed a huge crowd in Istanbul's Yenikapı rally arena, with two million attending as part of his election campaign for the upcoming local elections. According to the figures, Erdoğan's Istanbul rally recorded a historical level of attendance.
Starting his rally with a prayer for Istanbul, Erdoğan described the city as the hope of Turkey, the Balkans, Islamic countries and the entire world. Addressing a huge crowd chanting "Turkey is proud of you,"the prime minister said his Istanbul rally is being watched by the whole world.
Referring to the AK Party's coming into office in 2002, Erdoğan said, "Istanbul's elites did not believe that I would be elected prime minister. They thought that they controlled the nation's will and dissuaded the nation's mind, but the nation taught them a lesson in the ballot box. March 30 will be a lesson for them, but most importantly for the eavesdroppers in Pennsylvania."
He slammed U.S.-based controversial imam Fethullah Gülen, head of the Gülen Movement, accusing him of orchestrating a coup against Turkey's government. He reiterated the movement's abuse of the state's goodwill by attempting to discredit Turkey and called for families who have sent their children to Gülen-affiliated schools to remove them from those institutions.
"We will never give an opportunity to those who want to design Turkey with dirty operations. We will stand against those who try to steal the nation's will," said Erdoğan.

Denouncing Gülen, who has been living in self-imposed exile in Pennsylvania for 14 years and his immoral organization, Erdoğan said, "Organizations lacking morals do not have a chance to win, especially if this organization is based in Pennsylvania."
Referring to Gülen's farm in Pennsylvania and his movement's wiretapping scandals in which the movement eavesdropped on the prime minister and highly influential governmental authorities in the country, Erdoğan said, "Gülen bought land near his farm in Pennsylvania to fabricate the records." He claimed that Gülen had a high-technology montage facility near his farm to fabricate records used to overthrow the government. Erdoğan said Gülen's two nephews are experts on this subject and carried out the wiretapping and fabricating at the facility.
Calling out to the sincere followers of the Gülen Movement, the prime minister asked, "You have 17 universities. Did we not support you on every matter concerning these universities? Did we not give references for you to the governments of the countries where you have established those schools?"
Erdoğan vowed to serve the nation without discrimination. He said, "We are against ethnic, religious and regional nationalism. Everything that western Turkey has will also be available in eastern Turkey. "
Referring to the upcoming elections and the Gülen Movement's attempts to overthrow the government, Erdoğan said, "We do not accept a democracy without the ballot box. Underrating the ballot box means underrating the nation. They tried to override the elections just like a separatist terrorist organization, however we will never take a step back from protecting your [Turkey's citizens] rights."
Erdoğan also denounced the Republican People Party's (CHP) municipality approach and said, "The CHP says that they will return Istanbul back to what it once was. However, under the CHP municipality, all districts in Istanbul were full of garbage, corruption and water shortages."
Last Update: Mar 26, 2014 5:52 pm
RELATED TOPICS