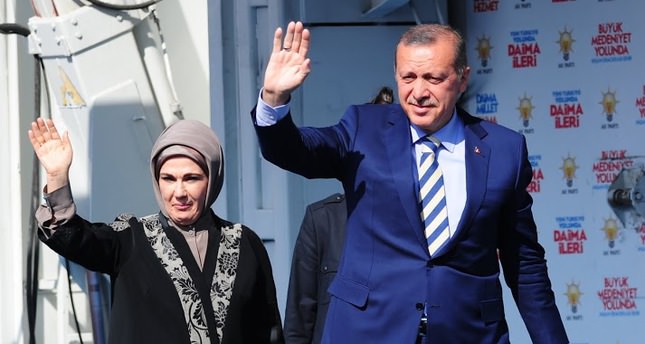 ISTANBUL — Turkish Prime Minister Recep Tayyip Erdoğan yesterday held election campaigns in the eastern cities of Van and Diyarbakır. Losing his voice due to his busy schedule of two to three election campaign rallies a day, Erdoğan said: "I apologize for my voice, but I could not have cancelled Van, I could not have cancelled Diyarbakır." Risking his own health, Erdoğan addressed a huge crowd in Van. Though he was expected to speak for 90 minutes, Erdoğan had to cut his speech at 40 minutes. A sentimental poem that Erdoğan shared with the huge crowd caused some supporters to become emotional and cry.

During his speech, Erdoğan touched on certain ongoing issues like the reconciliation process between Ankara and the Kurds, the democratization package, investment in the eastern region of Turkey, and the Gülen Movement that infiltrated the police and judiciary with the aim of overthrowing the government. Referring to the democratization package, he said, "We reinstated the rights [of Kurdish citizens], removed assimilation, refusal and bans on languages, ideologies, songs and books. If there is propaganda in the Kurdish language in Van today, it is because we paved the way for it."

Criticizing the Kurdish-based Peace and Democracy Party (BDP) that claimed to have paved the way for the democratization steps for Kurdish citizens, Erdoğan stated that the BDP only has 30 deputies, while the AK Party has 326 deputies and the party that took those significant steps was, in fact, the AK Party. "We did not take those steps through threats, we took them against threats. We did not take those steps under the shadow of guns, but against guns. Now BDP says 'we made the reforms, not the AK Party,' I ask: Why did you not make those reforms when there was a huge conflict [PKK-Turkey conflict] in the 1990s?" He continued: "BDP is not able to serve the citizens. They [BDP] left people in the region to live in garbage, mud and water shortage. They talk about democracy, but paved a way for conflict. Van deserves better. Van does not deserve these fascist, discriminative and racist pressures."

Erdoğan gave the message of peace and unity and touched on the PKK's conflict with Turkey, which continued for many years until the reconciliation process. "There is no blood in New Turkey; there is peace, unity and brotherhood." Denounc- ing the head of the Gülen Movement, Fethullah Gülen, who lives in self-imposed exile in Pennsylvania, Erdoğan said Gülen attacked both Turkey's national security and the country's brotherhood and unity.
Last Update: Mar 28, 2014 2:13 pm
RELATED TOPICS