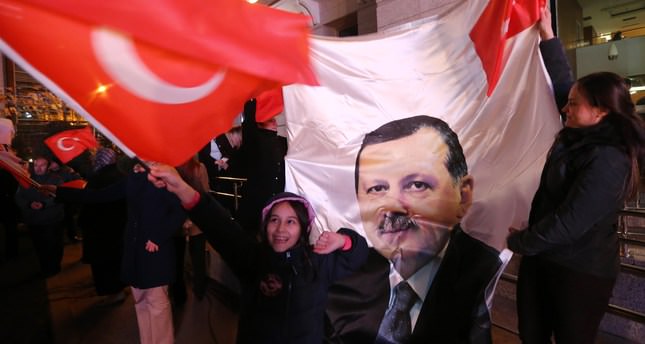 Despite smear campaign against the AK Party, it managed to win local elections by a landslide. Speaking with AK Party voters, Daily Sabah asked how the campaign atmosphere affected their decisions at the ballot box

ISTANBUL — The rulIng Justice and Development Party success in Sunday's local elections reflects the public's continued trust in the government. The opposition's failure to come up with viable alternatives to AK Party policies, coupled with the attacks against the AK Party, resulted in 45.5 percent of the electorate backing the government.

The March 30 local elections, which turned into an effective vote of confidence for the AK Party government, resulted in another landslide victory for the ruling party. The results showed that the AK Party's votes increased from 38 percent to 45.55 percent in spite of concerted efforts to weaken it using black propaganda during electoral campaigns.

The Gülen Movement, led by Fethullah Gülen, who has lived in self-imposed exile since 1999, tried on numerous occasions to weaken the government, including during the Dec. 17 operations and by wiretapping the phones of key figures in the government through infiltrating the nation's police and judiciary ahead of the March 30 elections.

Opposition parties, including the Republican People's Party (CHP) and Nationalist Movement Party (MHP) subsequently worked to decrease the votes of the AK Party.

Yet, the most shocking move came from the Gülen Movement, which regards itself as a religious community, but whose followers voted for the left-wing CHP candidates in critical cities in the elections and gave rise to allegations that there is an alliance between the CHP and the movement. After the results of the elections, CHP leader Kemal Kılıçdaroğlu on Monday denied allegations that his party joined forces with the Gülen Movement for the elections. Even though both sides denied the alliance, the Gülenaffiliated media outlets had continuously promoted CHP candidates ahead of the elections.

However, the question of whether the alleged alliance of the movement and CHP would prove successful in decreasing AK Party votes across the country was answered when the results of the ballot sent a shock through the main opposition CHP.

Expecting a sharp increase by getting the support of Gülen Movement followers in the country, CHP has seen only a 4 percent increase in its votes compared to 2009 local elections. Through its effective candidates in critical cities such as Ankara and Istanbul, CHP prepared intensively for the Sunday's elections. The campaigns, TV ads and nominating effective candidates such as CHP Ankara mayoral candidate Mansur Yavaş, who transferred from the MHP, and CHP Şişli district mayor Mustafa Sarıgül, who served Şişli for years, did not have the effect that CHP expected in the entire country.

According to elections results, the MHP experienced the biggest failure since it could not protect its previous voting rates and saw a 1 percent decrease in its votes across the country. Compared to the 2009 local elections when MHP garnered 16.1 percent of the votes, the party's votes decreased to 15.2 percent and lost some of the cities that were the MHP's fortresses in the north of Turkey.

The most striking loss for MHP was in the northern city of Kastamonu that was ruled by MHP municipalities for 20 years. Kastamonu residents on Sunday's elections voted for the AK Party mayoral candidate.

As nearly 50 million citizens went to the ballot box, Daily Sabah spoke to AK Party voters and asked them how the alliance between opposition parties and black propaganda campaigns of the Gülen Movement affected their voting behaviors.

Ahmet Demirbağ, a student at University of Galatasaray said, "I voted for the AK Party because of the opposition's failure to offer alternative policies. In many areas, including education, health and social services, the AK Party's policies are successful despite some insufficiencies. Although Erdoğan's rhetoric raises tension, I did not vote for CHP, which has contradicted itself."

Ülkü Güner, a student doing her masters at Istanbul University, said, "I am more afraid of the Gülen Movement than Erdoğan himself.
The Gülen Movement is illegal and as opposed to be a political group, it was first established as a religious organization. During the AK Party period, I have preserved my lifestyle as a secular. Also it is a fact that rightist political parties have always been more successful in local administrations."

Fırat Canev, an employee residing in Ankara, said, "I voted for the AK Party in Ankara since I do not support the CHP turning its back to its own supporters and nominating other political figures who have different political backgrounds. Even though I do not praise the AK Party candidate in Ankara, for the first time in my life, my ideological stance was ahead of my expectations from the municipality in local elections."

Suna Merve Aslaner, a housewife residing in the northwestern city of Düzce, said that she voted for the AK Party because of the continuous black propaganda of the Gülen Movement. "They came to my home and asked me to vote for the most powerful candidate against the AK Party. Nobody can orient my political preference, this is my democratic right and I have the capability to choose the candidate that I trust more, not them."

Murat Caner Korkmaz, a secondary school teacher in Ankara, said, "I voted for the AK Party because I like the firm stance of Erdoğan against all those slanders and black propaganda. I believe in him and I do not think that he will do anything that would be against the benefit of Turkey."