CHP turns on itself in search for cause of defeat 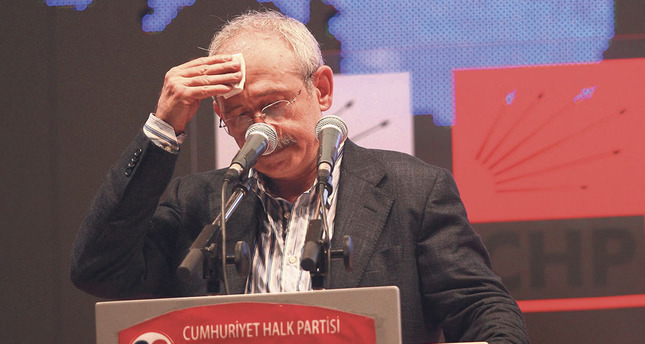 Furious at CHP's perceived cooperation with the Gülen Movement, some members revolt against Kılıçdaroğlu who is held responsible for the election defeat

ISTANBUL — The Nationalist Movement Party (MHP) candidate Kemal Çelik lagged behind with 24.29 percent. In the 2009 local elections, the AK Party received about 35.02 percent and lost Antalya as the CHP candidate garnered 40.02 percent of the vote. Antalya was the city that surprised Turkish Prime Minister Recep Tayyip Erdoğan the most in 2009 elections since Antalya elected CHP candidate Mustafa Akaydın after the AK Party chose not to nominate Türel that year. Erdoğan even expressed his disappointment over the loss in Antalya and indicated that he wanted to win Antalya back during his post-election speech in the previous local elections. Taking into account Antalya's local elections since 2004, the changing voting behaviors of Antalya residents show that citizens in Antalya are more concerned with the municipality's policies and services at the ballot box, as opposed to ideologies.

When the AK Party's victory in the city became clearer, the CHP challenged the results in 19 districts of Antalya and asked district election committees and the municipality election committee for a recount. The application was denied by the election committee. CHP Provincial Chairman Devrim Kök has since said that the party would apply to the Supreme Election Board (YSK) for a recount. On CHP's defeat in Antalya, CHP's Antalya Deputy Gürkut Acar spoke to Daily Sabah and said that the CHP increased its votes to a certain extent in the elections and it was a significant beginning. He claimed that the AK Party was no longer legitimate and it would lose its votes in the upcoming elections. Acar denied allegations of CHP's alliance with the Gülen Movement. He said, "These are just slanderous allegations of the AK Party.

If there is an alliance for the elections, why does the ballot box not reflect these votes?" He noted that Antalya's residents voted for the AK Party due to their daily wants and the AK Party used the government's power and financial sources as much as it can to gain the upper hand in the city.

CHP Antalya Deputy Yıldıray Sapan spoke to Sabah newspaper and made a number of striking comments about the election results. He said that arrogance and big ego lost in Antalya. Criticizing his party's policy regarding the elections, Sapan said, "Antalya is a city on the coastline, you cannot disregard the seaside while evaluating Antalya. Compared to the 2009 local elections, we left 4 percent behind on the basis of provincial general assembly and lost a significant metropolis and four cities, including Antalya."

On the transfer of former MHP member and district Mayor Mansur Yavaş - a candidate in the Ankara district of Beypazarı - to the CHP ahead of the Ankara mayoral race, Sapan said, "Considering our principals, we disregarded certain moves and transferred candidates from other parties, but we could not gain any success. It has been also seen that transferring candidates from other parties does not help gain success."

When asked his opinion on the alleged alliance between the CHP and Gülen Movement, which infiltrated the police and judiciary with an aim of undermining the Turkish government, Sapan said, "I do not think that the Gülen Movement supported the CHP during the elections.
I generally criticize the candidates. We realized that preferred candidates could not win the elections." Contradicting Sapan's statements, Artvin CHP candidate Emin Özgün said that the Gülenist-CHP alliance was a big reason for the CHP's failure in Artvin. Accepted as a CHP stronghold in northeastern Turkey, the defeat in Artvin caused a big shock for the CHP. The city has had a CHP mayor since 1999 but Artvin residents signaled at the ballot box that they wanted a fresh start with an AK Party mayoral candidate.

According to the results, AK Party Artvin mayoral candidate Mehmet Kocatepe garnered 46.28 percent of the vote and Artvin former mayor and CHP candidate Emin Özgün lagged behind with 36.89 percent. Compared to 2009 elections, CHP's votes dropped 9 percent.
Speaking to Sabah newspaper on the CHP's failure, Özgün said that the alliance with the Gülen Movement led him to lose the elections in Artvin. He stated that Gülenist-CHP alliance caused some concern in the CHP at the grassroots level and led to a loss of support. Elected as mayor three consecutive times, Özgün said, "They [Gülenists] came to me ahead of the elections and told [me] that their 1,000 voters would vote for me, I accepted." He pointed out that Gülenists had no voters as they claimed.

Özgün said that during the electoral campaign, Gülenists worked for him in Artvin, but their voting did not translate into results at the ballot box. He said, "The alliance with Gülenists drew the reaction of our social democrat grassroots.

They invited me to their school in Artvin, they pledged me their votes." He stated that Gülenists' votes had no effect both in Artvin and across the country. Highlighting that the MHP's votes decreased and CHP's votes did not increase across the country, Özgün harshly criticized Gülenists by saying, "These results are just a disappointment not only for us but also for the Gülenists."

Claiming that reports of an alleged alliance between the CHP and Gülenists amounted to slander, CHP leader Kemal Kılıçdaroğlu has said that if evidence exists supporting the assertion that there is any alliance between the CHP and Gülen Movement, it must be made public.
However, Özgün's remarks contradict the claims made by Kılıçdaroğlu during his post-election speech regarding an alliance between Gülenists and the CHP. Considering the different voices rising from the CHP, critics assert that the alliance with Gülenists caused an internal clash of ideas within the party.

The AK Party victory in the March 30 local elections, seen by many as a popular vote of confidence for the government, saw the AK Party win most critical cities by a landslide and gain the upper hand in some Republican People's Party (CHP) strongholds. The results at the ballot box showed how the alliance between the Gülen Movement and its persistent use of black propaganda backfired, causing a rift within the CHP. Antalya on Sunday witnessed a tight race which saw a high number of voters head to polling stations.