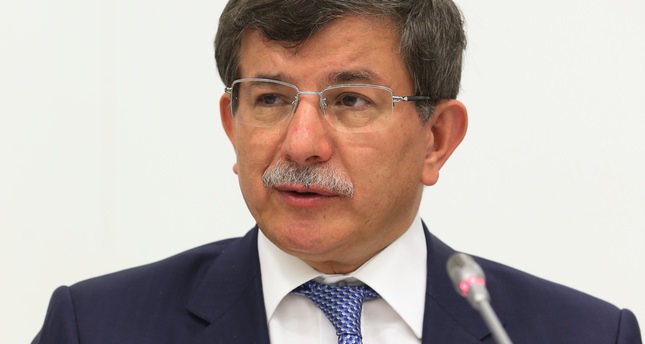 ISTANBUL — Foreign Minister Ahmet Davutoğlu has vowed to respond to attacks against the tomb of Suleiman Shah as it would any other part of Turkish soil. "When a missile is [launched] into Turkey by the Syrian regime, the [Islamic State of Iraq and the Levant] (ISIL) or any other element we will equally act in return," said Davutoğlu. Davutoğlu, in New York for meetings on Turkey's provisional membership on the U.N. Security Council, was answering questions about Syria and referred to Prime Minister Recep Tayyip Erdoğan's balcony speech on the night of local elections.

Davutoğlu answered that incidents in Syria are far beyond any war, as even war has rules. He added that the Syrian regime has used the most relentless methods in history and committed huge crimes against humanity. ''Hundreds of thousands of people died and millions became refugees," he said. "The Turkish border was violated many times. Within the framework of the inhumane attitude which was pointed out by our prime minister and the violations of Turkish borders, what we are talking about is that Turkish Armed Forces, who changed the rules of engagement, shot down a Syrian war [plane]. Thus, we think, the matter should be seriously monitored. This is what the prime minister was pointing out."

Davutoğlu commented on the seizure of a village in the region of Kesab near the tomb of Suleiman Shah, which was seized by ISIL, a militant organization formerly linked to al-Qaeda. Noting that the tomb of Suleiman Shah has been recognized as Turkish soil since 1921, Davutoğlu added, "This place belongs to the Republic of Turkey. Our soldiers in the region protect Turkey's soil. Any attack against them will be regarded as one against Turkish soil and will be reacted duly. Turkey is determined to protect the rights of its citizens and its own soil and is able to do this."

Davutoğlu highlighted that Turkey is not going to intervene in skirmishes in Kesab. ''As long as there is not any action against us, Turkey will not intervene," he said.

Davutoğlu also said that Syrian-Armenians may come to Turkey when they face troubles. "Turkey is ready to help. From Kesab or anywhere else, Armenians are welcome in Turkey."

The minister noted there were negotiations between Turkey and Israel recently and added, "We expect positive [developments] in the future. However, time will show when."

Davutoğlu also replied to a question about the timing of the normalization in relations with Israel. "Out of the three main principles set for the improvement in the relations, one was fulfilled last year, which is the apology. When it comes to the issue of compensation, serious ground was covered recently. In addition, there are some ongoing negotiations about lifting the embargo on Palestine and Turkey's communication with Palestine."

The minister also spoke on the process of Turkey's provisional membership in the UNSC. He explained that he came to New York to join an array of activities for the provisional membership of Turkey for the 2015 to 2016 term. He noted that he participated in the meeting of Alliance of Civilizations and will come together with the Africa group to explain Turkey's relations with African countries and the African Union and seek support.

Davutoğlu added that he will later work to forge greater ties with Caribbean countries and the Pacific Islands.

The minister expressed his desire to get a positive result in the elections of provisional membership to UNSC in October. ''This will be a quite rare example, a country being a member of UNSC for the second time after five years. We are trying to achieve this goal if God permits," he concluded.