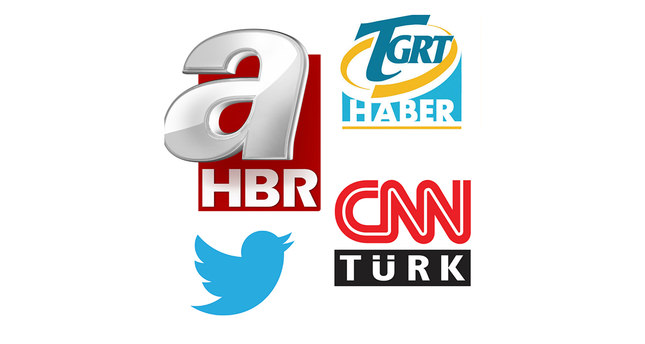 Court rulings, ignored by Twitter are obeyed by local media firms, some of which received penalties in recent days

A Constitutional Court decision delivered on Thursday saw a block on access to Twitter lifted. The court ruled that the ban contravened principles of freedom of expression, which are guaranteed by the constitution, but a broadcasting ban was imposed on a number of media outlets including A Haber on the same day. Turkuvaz Media Group is the parent company of this paper and A Haber. The government had accused Twitter of ignoring local laws and neglecting complaints filed by Turkish citizens who had argued that their rights had been violated on Twitter.

Thirteen media outlets, including A Haber, TGRT Haber, NTV, CNN Türk, Star, and Kanal 5, have been hit with a broadcasting ban by the Supreme Election Board despite the fact that Turkey's Supreme Board of Radio and Television (RTÜK) has not explicitly listed any broadcasting violations. The ban will require the stations to discontinue their scheduled programs and instead broadcast material such as documentaries and educational programs.

The Supreme Election Board's decision was based on allegations that A Haber broadcast programs about the reconciliation process, December 17 operations and has allegedly reserved more time for certain campaign rallies than others. The board did not allow any means for channels to appeal or challenge the ruling as it was a binding constitutional order.

The move has been criticized by a number of lawyers for restricting freedom of the press and others have noted that the timing of the decision was suspicious as the ban on Twitter was lifted even though Twitter has refused to close down accounts which directly targeted the state's security along with private rights of individuals, whereas channels like A Haber have not violated any principles outlined by the country's highest radio and television authority.

On the other hand, legal experts claimed the lifting of the ban on Twitter was controversial as the popular social media website has not agreed to close down all of the accounts violating personal rights and privacy, some of which contained hate speech, insults and threats, and all of which are considered illegal. The government also criticized Twitter for refusing to open an office in the country or paying taxes.
Lawyer Barış Çabuk said under the constitution and the European Declaration of Human Rights it is illegal to impose such restrictions. Lawyer Celal Ulgen has opposed the broadcasting ban and stated that it contravenes the freedom of communication and expression and that it was unacceptable to ban objective news reporting as in the case of A Haber.

Sevilay Yükselir, a journalist at Sabah newspaper, said that A Haber had an unbiased and informative broadcasting policy during the election period and stated that she thought the punishment was harsh and unjust. Bekir Hazar, the moderator of the show "Yaz Boz" on A Haber has called on officials to review the ruling and accused officials of trying to appeal to "the Gülen Movement."

Others who criticized the ban include Mustafa Şentop, a legal expert and AK Party parliamentarian, who argued that the Constitutional Court has overstepped its authority by imposing a ban on TV channels even though RTÜK has not publically listed any violations. Minister of Justice Bekir Bozdağ recently evaluated the court's decision and noted that it was a binding decision. "It must for sure be abided by and implemented," said Bozdağ, who claimed that it was a politically motivated decision rather than a legal one.

The prime minister said Twitter was a profitmaking company and it was controversial that the Constitutional Court reached a decision within two days when there were other files. Erdoğan also criticized the decision for failing to address national interests, including the personal privacy of Turkish citizens violated through Twitter. He also criticized the Constitutional Court for turning a blind eye to a significant number of court decisions mandating Twitter remove controversial content. "This is not a lawful implementation" said Erdoğan, who claimed proper procedures that should have been taken before reaching this decision were not followed; the Constitutional Court did not consider precedents in the United States, France, Spain or the United Kingdom; and the decision was made hastily.