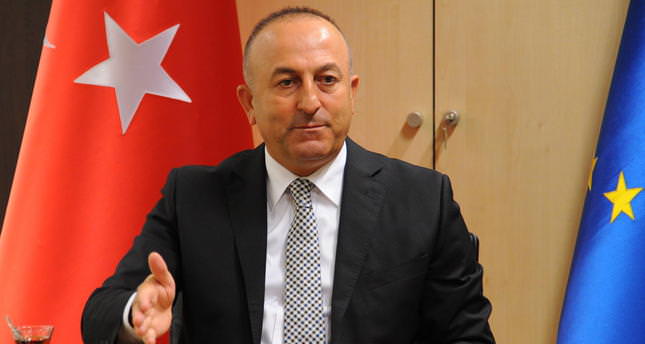 by daily sabah
Apr 06, 2014 12:00 am
ISTANBUL — As Turkey remains focused on its commitment to European Union accession following the March 30 elections, the EU and Turkey brought the negotiations to the table once again. Despite the government's heavy agenda, the Gülen Movement's smear campaign targeting the government, and the ups and downs in EU-Turkey relations, it is expected that new developments will be seen in coming years. Speaking to journalists at an EU Foreign Ministers meeting in Athens, Turkey's Minister for EU Affairs and Chief Negotiator Mevlüt Çavuşoğlu touched on talks over Turkish-Greek bilateral relations, the Cyprus issue and Turkey's EU accession process.
Çavuşoğlu said that Turkey's expectations to open the EU chapters appear to have not been met. He said that even though Greece showed it psychologically supports Turkey's EU path, the EU does not seem eager to open these chapters ahead of the EU Parliament elections.

Referring to Italy's taking over the presidency of the EU in the second half of 2014, Çavuşoğlu said that Turkey will leave its EU accession hope to Italy's EU presidency period.

Highlighting that the chapters Turkey aimed to open are blocked by Southern Cyprus, Çavuşoğlu said, "There is common ground toward opening the chapters, but who will persuade Southern Cyprus on this issue? With all this in consideration, the issue appears not to be solved ahead of May elections [EU Parliamentary elections]."

Stating that the Cyprus issue was brought to the agenda during the meetings, Çavuşoğlu said that the reconciliation process which had begun between Turkey and Cyprus was praised and supported in the meeting.

While the Turkish side is eager for concrete steps toward opening the chapters, Turkey's EU accession process appears to have taken a backseat due to ongoing internal issues in the EU ahead of its parliamentary elections.After Turkey's election was watched closely by media across the world, Germany's Christian Social Union party Secretary-General Andreas Scheuer commented on the March 30 elections. Scheur said Turkish Prime Minister Recep Tayyip Erdoğan's balcony speech on election night threatened the opposition and offered an example of why Erdoğan's Turkey cannot belong to Europe. Causing a stir with his remarks on the EU, Scheuer was criticized by Jean-Claude Juncker, who has been nominated for President of the European Commission. Juncker said that the negotiations will be held not with Erdoğan but with Turkey. In the prime minister's balcony speech, Erdoğan slammed the Gülen Movement, which carried out the Dec. 17 operation and wiretapping scandals to discredit the Turkish government ahead of the March 30 elections. He said that those who try to change the course of Turkey through illegal messages and acts will be razed to the ground. Erdoğan denounced the head of the movement, Fethullah Gülen, who has lived in self-imposed exile in Pennsylvania for 14 years and warned his foes that he will seek them out even if they are "hiding in caves."

Following the Turkish local elections, the EU urged Turkey to redouble its reform efforts that delivered a victory for Erdoğan's AK Party, but also highlighted political division within the country. "Turkey as a candidate country now needs to move forward in the work that needs to be done on the European agenda, which means re-engage fully in the reforms in line with European standards when it comes to the rule of law and fundamental rights," Maja Kocijancic, a spokeswoman for EU Foreign Policy Chief Catherine Ashton, said. She spoke of "worrying developments" in the country over the last three months and called for an effort to "reach out to all citizens, including those who are not part of the majority vote," so as to ensure the "strongest possible engagement on reforms." She added, "It's very clear that there has to be democracy, that there has to be work on fundamental and human rights to really see Turkey make progress on the European path."