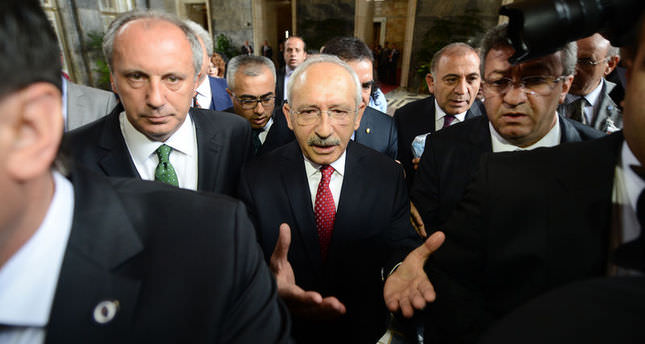 by Ali Ünal Apr 08, 2014 12:00 am
ANKARA — The leader of Turkey's main opposition Republican People's Party (CHP), Kemal Kılıçdaroğlu, was assaulted on the way to a party group meeting at the Parliament on Tuesday. Footage showed Kılıçdaroğlu being punched by the attacker two times and his glasses being jarred loose. An assailant, believed to be a visitor, was detained by the police following the incident. The incident occurred when the CHP leader was greeting deputies of the Peace and Democracy Party (BDP), Altan Tan and Sırrı Sakık.

Kılıçdaroğlu appeared well just a few minutes after the attack and delivered a speech despite the assault.

In his speech, Kılıçdaroğlu called on everyone to remain calm and stated that the CHP is determined to bring healthy democracy to Turkey. "Pressure and violence will not hinder us. We won't step back, the path to democracy is full of obstacles," he added.

Just after the assault Prime Minister Recep Tayyip Erdoğan said that he strongly condemns the attack and announced that he will call Kılıçdaroğlu: "The assault is unacceptable in democracies.

We strongly condemn it." BDP Deputy Sırrı Sakık later announced that the attack has nothing to do with their party.

According to media outlets, the attacker was a 28-year-old male named Orhan Övet. Sources stated that the attacker has been charged by police on 16 separate charges, including gun and drug related crimes.

Speaking at his party's group meeting following the attack, Kılıçdaroğlu condemned the death sentences handed down to 529 supporters of the Muslim Brotherhood in Egypt and called on Egypt's leading political figures to stop their sentences from being carried out. He then criticized his own party by saying that the CHP could not meet the world's expectations during local elections. He said, "We [the CHP] are not happy about our vote increase since our expectations were higher. We do not have the luxury of blaming our citizens. We need to make up for our deficiencies." Claiming that there are citizens who are not listening to their consciences, Kılıçdaroğlu said that it is the job of the CHP to engage with those citizens.
Last Update: Apr 08, 2014 9:08 pm
RELATED TOPICS