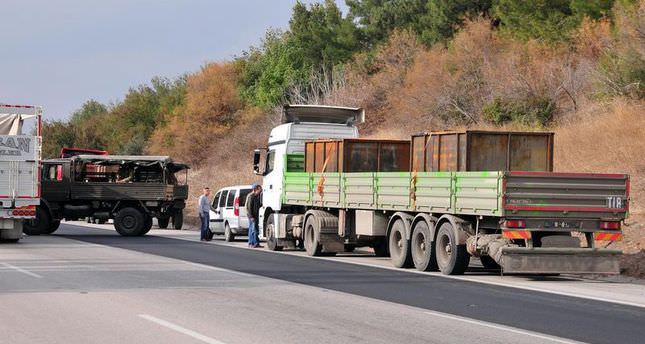 by Nurbanu Kızıl
Apr 08, 2014 12:00 am
ISTANBUL — Turkey's National Intelligence Agency (MİT) recently finalized a comprehensive report regarding the raids on its trucks carrying humanitarian aid to Syria in Hatay and Adana on Jan. 1 and Jan. 19 by agents of the Gülen Movement within the Public Prosecution Office, according to allegations. This comes as Parliament prepares to reform MİT legislation to address the shortcomings of the law.

According to the report, Aziz Takçı, the public prosecutor of Adana, did not have the mandate to carry out the operation as Atilla Rahimi was on call on Jan. 19. Despite this, Takçı was the one informed about the incident.

Prosecutor Özcan Şişman was also unauthorized to carry out the operation in Hatay on Jan. 1, as he was not on duty and overstepped his authority. The report also said the warning notice officially came at 7:30 a.m., but Adana Provincial Gendarmerie Commandant Chief Lieutenant H.Ö. met with First Lieutenant Ö.K. at 4:00 a.m. and went to Takçı's house at 6:00 a.m. on the day of the incident, based on the cellular signals picked up by investigators. Another incident of administrative irregularity was Ö.K.'s participation in all stages of the raid even though he was not on duty or on call, according to reports.

Many question the fact that Takçı issued a search warrant even though the trucks were not on the way before 8:00 a.m. when he received the request for a search warrant. On the other hand, there are strong presumptions that Takçı knew the trucks belonged to intelligence and not al-Qaeda, as was claimed. The Supreme Board of Judges and Prosecutors (HSYK) launched an investigation into the prosecutors who were involved in the incident and sent inspectors to Adana to hear Şişman and Takçı's testimonies. An investigation is also underway to inspect potential suspects, including gendarmerie and security forces officials. M.S., a gendarmerie commander, stated in his testimony that his superior commanders strictly forbade MİT officials found in trucks to speak or make any contacts and requested they be handcuffed right away. M.S. also said he saw someone taking photographs of the incident in a private vehicle - presumably journalists from Zaman, a newspaper affiliated with the Gülen Movement.

Denying any charges about the incident, M.S. said he fulfilled the duties ordered by his superiors.

Critics allege the raid was planned and administered by agents of the Gülen Movement and refer to the jammer that was placed in the area the operation was conducted. They argue the sole purpose of this was to prevent MİT officials' lines of communication, which would have stopped the raids.

Three MİT trucks carrying humanitarian aid to Syria on Jan. 19 were stopped and raided by Gülenist agents within the judiciary and security forces in Adana. MİT officials were mistreated, assaulted and handcuffed in a manner similar to terrorists by these agents contrary to the law and outside their authoritative boundaries. A new MİT law, which was put on hold due to local elections, is expected to be brought to the Parliament's agenda today. The discussions will include President Abdullah Gül's input and may change or repeal some provisions in the law. The draft redefines MİT's duties and was unjustly criticized by a number of media organizations that attempted to create a negative impression without taking into consideration similarities in laws worldwide. These critics claimed the draft law would allow the state to overstep its boundaries, whereas intelligence provisions of EU countries and the United States are much more extensive and impose stricter penalties on the exposure of confidential documents and files threatening state and national security.
Last Update: Apr 08, 2014 9:43 pm