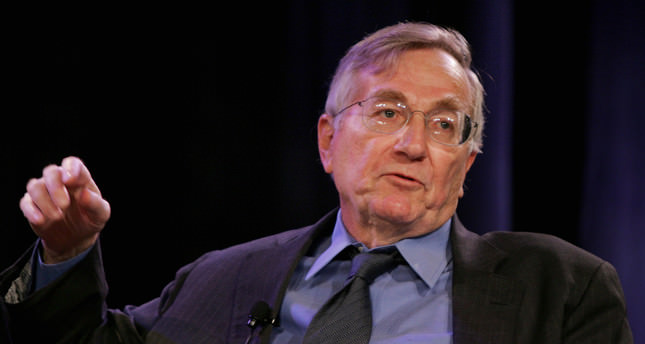 by Daily Sabah Apr 09, 2014 12:00 am
ISTANBUL — Claims made in the controversial article written by Seymour M. Hersh in the London Review of Books, published on April 6, 2014, about the chemical attacks carried out in Ghouta and other locations in Syria on Aug. 21, 2013 were proven baseless, according to Turkish officials. All claims made in the article were debunked one by one in a detailed internal memo. In the document, experts showed the accusations made by Hersh did not represent the truth.

Hersh's article titled "The Red Line and the Rat Line" claimed that the Turkish officials was involved in the incident and supported radical groups that conducted attacks with chemical weapons in Eastern Ghouta, near Damascus, killing more than 1,500 civilians, including children. Hersh based these allegations, which the officials say are "unfounded," on a former anonymous intelligence agent's statements and failed to provide further evidence according to the officials' statement. In the article, it is alleged that Haytham Qassab, an individual with connections to radical groups in Syria, attempted to acquire the deadly compound sarin from Turkey, referring to an operation which took place in Adana on May 28, 2013.

It was also alleged that an organization associated with the al-Nusra Front was attempting to acquire sarin from Turkey. "Adana's Office of the Governor has made the necessary statements and the articles that were seized here did not contain sarin gas," said the statement.
It was highlighted that the White House and the U.S. Department of State have refuted Hersh's claims that Turkey was behind the attacks in Syria. "There is no question that these attacks last Aug. 21 were done by the Syrian regime," said Jen Psaki, the spokesperson for the State Department. A report released by the United Nations dated Feb. 12, 2014 stated that materials to manufacture the missiles used in the attack resemble those manufactured in Russia, while the officials' statement noted it was irrational for Syrian opposition forces to conduct chemical attacks on a region controlled by them since 2012. "The Turkish government's attitude and response to the Syrian humanitarian crisis is clear. Turkey has taken steps in the direction toward establishing peace in Syria and first accepted refugees on April 29, 2011," officials' statement said, adding that the number of Syrian refugees according to the Emergency and Disaster Management Organization surpasses 714,000, 70 percent of whom are made up of women and children, while the total amount of aid provided to these refugees has surpassed $2.5 billion according to the U.N. "Allegations in the aforementioned article written by Hersh are completely unfounded, speculative, are not based on sound evidence and cannot be taken seriously and they have also been refuted by American offices," the officials stated, underlining the fact that Turkey has clearly expressed its attitude by standing up against al-Qaeda and all organizations associated with terrorism, and has faced attacks by such terrorist organizations. "Ignoring this truth and asserting that Turkey supports radical terrorist groups in the region without any proof is nothing but twisting the facts," the officials stated.