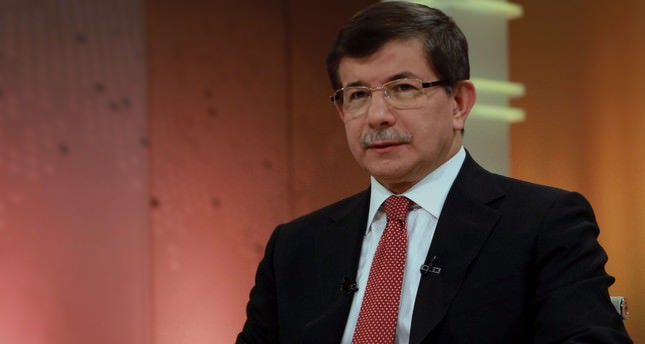 ISTANBUL — Foreign Minister Ahmet Davutoğlu slammed the Gülen Movement's attempts to topple the Turkish government, including himself, after members loyal to the movement infiltrated the police and judiciary. Speaking on Wednesday on a TV program aired on Kanal 24,

Davutoğlu made striking remarks about Gülen-affiliated media outlets, the March 30 election results and Gülenist schools abroad. Harshly criticizing the smear campaign that has been carried out against the Turkish government since the Dec. 17 operation that saw sons of key ministers taken into custody by Gülenist infiltrators, Davutoğlu said the Turkish government is being patient in its response.

"But our patience should not be misunderstood. The reason behind our patience is our respect for those in this movement who have a conscience," he said.

On Gülenist schools abroad and the allegations that Turkey will shut down these schools, Davutoğlu said there is no such instruction to close down the schools but there are clear instructions that those who carry out operations against Turkey and try to insult the Turkish government will pay the price. The foreign minister pointed out that it is the government's duty to prevent the spread of defamation campaigns to discredit and harm the country's global reputation.

Referring to the early years of the establishment of Gülenist schools, Davutoğlu noted, "We [the Turkish government] made great effort with those schools. I visited all the schools, but now without any shame they alleged that we are trying to close down their schools abroad."
Criticizing the death penalty issued against 529 people in Egypt, Davutoğlu said Turkey stood with the Egyptian people since the beginning of the unrest which followed the ousting of democratically elected president Mohamed Morsi in 2013.

Davutoğlu said the death penalty decision will not provide stability in Egypt, but rather cause deeper polarization. "Their foreign minister said the sentence has not received its final approval, so it could be presented as forgiveness by the next president, which could be [Field Marshal Abdel-Fattah] el-Sisi, if he decides to do so," the foreign minister said.

When asked about Turkey's nationwide March 30 local elections, Davutoğlu said it was a clear vote of confidence in the ruling AK Party of Prime Minister Recep Tayyip Erdoğan. "The people said that they are happy with us and what we have been doing for the past 12 years.
They authorized us to fight against the operations toward our nation," he said.

The foreign minister went on to say that no other political party had the nationwide reach of his AK Party. Davutoğlu claimed if there was no AK Party, then Turkey as a whole would be divided into politically partisan regions.

Davutoğlu said an investigation is ongoing into a leaked conversation between him and top security officials who were recorded discussing a possible military operation in Syria; the story made headlines after the secret discussion was uploaded to YouTube. "We will find the perpetrators, no matter what," said Davutoğlu. The foreign minister said they had been discussing every possibility about a possible threat to the Suleiman Shah tomb in Syria - a Turkish enclave - and searching for a peaceful option. "The recordings are montaged; we would have started a war if we wanted to," he said, adding that Turkey's airspace is not a stop-by and Turkey had responded rightfully to threats by Syrian war crafts.

When asked about allegations that Turkey plans to get involved in the Syrian civil war after the Islamic State of Iraq and the Levant (ISIL) last month threatened to demolish the tomb of Suleiman Shah, Davutoğlu said, "Suleiman Shah is Turkish territory. If Turkey had wanted to go to war with Syria, we would have taken action when they dropped our jet in the first place. Until now, we have tried to keep Turkey out of war."
Last Update: Apr 11, 2014 2:16 am
RELATED TOPICS