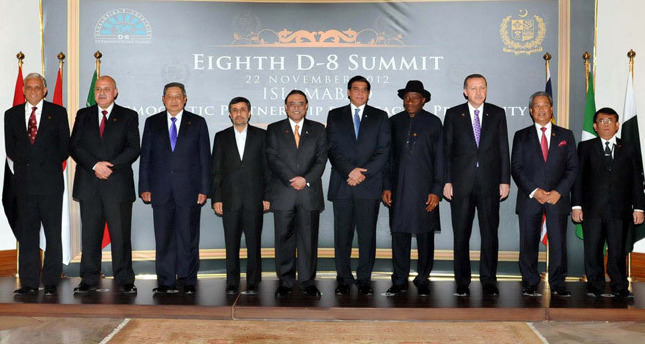 by AA Apr 11, 2014 12:00 am
ANKARA — The Pakistani Embassy in Turkey's capital Ankara hosted representatives of the Developing Eight (D-8) countries on Thursday.

The D-8 are a group of developing countries with large Muslim populations that have formed an economic development alliance. It consists of Bangladesh, Egypt, Indonesia, Iran, Malaysia, Nigeria, Pakistan, and Turkey.

D-8 Secretary General Sayed Ali Mohammad Mousavi said the countries had a trade volume target of 500 billion US dollars by 2018.

"At the moment the figure might seem large, but we hope to reach our goals," he said.

Secretary General Mousavi said this year would be a busy one for the D-8 countries as a lot of meeting and commissions would be held.

"Energy ministers will gather on May 28 and we are delighted that Turkey will host this first meeting on energy," he said.

Musavi said that the group continued to seek development, particularly in the fields of trade, energy, agriculture, transport and industry.

The objectives of D-8 Organization are to improve member states' position in the global economy, diversify and create new opportunities in trade relations, enhance participation in decision-making at international level, and improve standards of living.