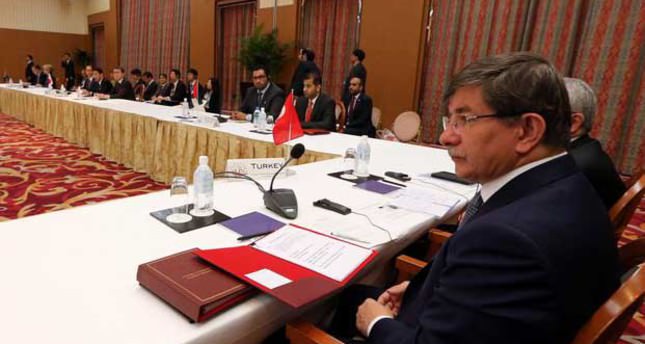 by AA
Apr 12, 2014 12:00 am
HIROSHIMA — Turkey's Foreign Minister Ahmet Davutoğlu has criticized the international community for failing to act in the face of last year's chemical attack near the Syrian capital of Damascus.

Ahmet Davutoğlu, attending a two-day nuclear non-proliferation meeting in the historic Japanese city, accused the Syrian regime of using chemical weapons in August, adding there was evidence of gas attacks as recent as two weeks ago.

"Similar picture which we have seen in Hiroshima today were seen last year in Damascus where children were killed… But still international community did not react in a manner we want," he told the meeting Saturday in English.

On August 21, 2013, chemical weapons were used in the suburbs of Damascus, killing up to 1,400 people during their sleep. The Syrian opposition and the West blamed the Syrian regime for the attack.

Davutoğlu said the nuclear powers should take primary responsibility in preventing such mass killings. He criticize the United Nations Security Council for its failure to act on the chemical attack last year.

"The engagement and clear objective of the nuclear powers will be very important to stop similar cases and humanitarian disasters because of the use of weapons of mass destruction," he said.

More than 100,000 people have been killed during the ongoing three-year conflict in Syria, which has also internally displaced more than 6.5 million people, according to the U.N.