The guardian of Montreux Convention is Turkey 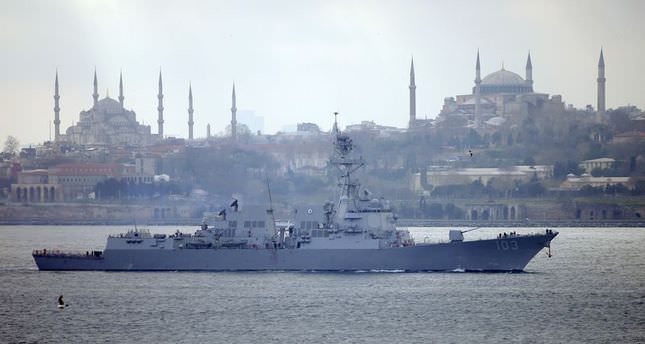 Davutoğlu played down tensions with Russia, dismissing claims Moscow 'threatened' Ankara over its alleged breaching of the Montreux Convention.

He said the treaty was "vitally important both for stability in the Black Sea and the security of Istanbul and the straits."

"Turkey has never eschewed its responsibilities, and remained faithful to the convention," Davutoğlu said in the Japanese city of Hiroshima on Sunday.

Russia claimed earlier this month that two U.S. vessels exceeded the waiting period in the Black Sea region, 21 days, as specified in the convention.

The Turkish Foreign Ministry responded on Thursday that only one U.S. vessel, "USS Taylor," stayed longer as it experienced a breakdown and had to be taken out with the help of a towing boat.

Davutoğlu left Hiroshima for Mexico on Sunday after attending a nuclear non-proliferation meeting in the historic city and holding bilateral talks with Japanese officials.

During his trip to Mexico City, the Turkish foreign minister will meet his counterparts from hosting Mexico, Indonesia, South Korea and Australia.

The meeting is part of a recent initiative, MITKA, after country initials, that aims at governance cooperation among the member states, all members of the Group of Twenty.