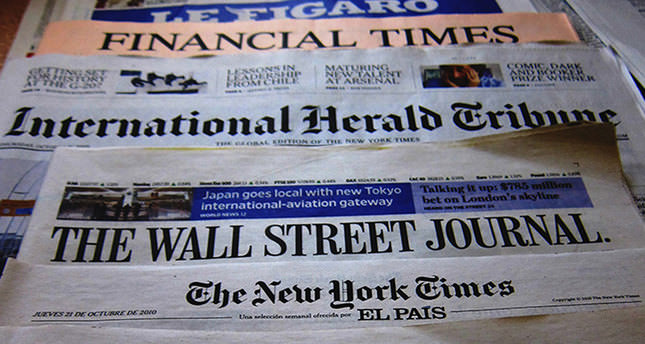 Selective reading of Turkey's current affairs leads certain foreign newspapers to print stories from correspondents who are blind to the society, failing to predict the voters' choice and thus doing a disservice to their readers

ISTANBUL — Since the Gezi Park protests started in June 2013, the reporters of several non-Turkish media outlets have launched a campaign against Turkey by claiming that Prime Minister Recep Tayyip Erdoğan is behaving like a dictator and that Turkey is losing its reformist features and becoming a more autocratic country where different lifestyles are not welcome. These reports have covered both Turkish domestic and foreign policies and depicted the country as failing in every field, from the economy to its policy on Syria.

Despite the government continuing to expand, initiating new reform packages and attempting to pull Turkey in line with European Union standards, several media outlets depict Turkey as regressing to the dark ages. For some reason, they prefer to be against Erdoğan and his Justice and Development Party (AK Party).

There are a few main points on which they focus. Firstly, they claim that Turkey is one of the most dangerous countries in the world for reporters and there is no press freedom. Ironically, they make this claim while living in Turkey and working as journalists.

Their second claim is that Erdoğan is becoming more and more autocratic by the day. They completely ignore the reform packages and government arguments, while criticizing its policies. Thirdly, they are skeptical of the AK Party's chance to protect, let alone increase, its votes. Yet, the AK Party received 45 percent of the vote in the March 30 elections, while it gained 38 percent in the 2009 local elections.

It is true that many journalists were imprisoned in Turkey during the Ergenekon and Kurdish Communities Union (KCK) cases which were filed as a result of a coup threat against the government and the establishment of an independent Kurdish state by the separatist Kurdistan Workers' Party (PKK), respectively. No reporter even mentioned that none one of these journalists were sentenced based on their articles or opinions, but rather for being part of an alleged organized crime. For instance, Nina Ognianova, a member of the Committee to Protect Journalists (CPJ) said on May 16 that "47 journalists continue to languish in Turkey's prisons, most of them not yet even tried. Thousands of other journalists in Turkey have been subjected to crippling punitive lawsuits, while Erdoğan continues to chastise media outlets and individual journalists who challenge his policies." Yet she could not offer examples of any published pieces which caused any of the journalists to be imprisoned.

Similarly, Christophe Deloire, director general of Reporters Without Borders, and Joel Simon, executive director of CPJ, claimed without any evidence that the Ergenekon and KCK cases were ultra-nationalist conspiracies. Yet none of these authors even mentioned that Turkey passed regulations to free prisoners detained for more than five years without receiving final verdicts.

As a result of the regulation, many of the prisoners who worked as journalists were consequently freed.

Many reporters and media outlets continue to accuse Erdoğan of becoming a dictator because of his policies. In his columns published in the Gülenist daily, Today's Zaman, Joost Lagendijk, who is a former Green Left Member of the European Parliament (EP) and served as the joint chairman of the Turkey-EU Parliamentarians delegation, claimed that Erdoğan was becoming a dictator through passing a bill to reform the Supreme Board of Judges and Prosecutors (HSYK) and banning Twitter and YouTube, as if Erdoğan is capable of doing everything on his own.

During the Gezi Park protests, U.S.-based CNN International broadcast the incidents live and portrayed Turkey as a war zone.

When the Gülen Movement appeared as a threat to the legitimate government through infiltrating state institutions to invisibly seize power, the precautionary measures taken by the government were depicted by foreign media outlets as an authoritarian tendency, despite the Gülen Movement being a religion-based organization and threatening secularism directly.

Another columnist, Amanda Paul, continuously claimed that the Gezi Park protests occurred to defend democracy while the AK Party was derailing Turkey from democratic values. She also claimed that Erdoğan lost his legitimacy and used the protests as evidence for this. But she chose to ignore Erdoğan's supporters gathering in squares to support him. Many of the reporters used Zaman newspaper and its English version, Today's Zaman, which are considered Gülen's direct hands in the media. Although the Gülen Movement is not a legitimate political actor and does not act like a political party but rather like a secret, masonic organization, its news reports were used as the only accurate sources.

Amanda Paul always alleged that Erdoğan was damaging Turkey. She wrote that "Turkey's prime minister, Recep Tayyip Erdoğan, remains the most powerful and charismatic man in Turkish politics today. Yet, despite the many positive steps he has taken during his term in office, with his increasing retreat from the path of democracy and growing disregard for freedoms and the rule of law, Erdoğan may well have pressed the self-destruct button on his own legacy." As usual, she did not explain further how Erdoğan was destroying himself. After the local elections, Turkey saw that Erdoğan was still a legitimate leader.

Thirdly, these reporters claimed that Erdoğan was not capable of receiving a huge amount of votes as he was losing his legitimacy and even damaging his own voters. A report in The Economist prior to the local elections claimed that "[a]n increasingly autocratic prime minister is losing touch with voters and damaging his country." It is difficult to understand how the Economist made such a claim while thousands of people were gathering in every city visited by Erdoğan.

In the same article, the reporter repeats the claims of Erdoğan's dictatorial rule, saying that many policemen, judges and prosecutors were sacked. Yet, the report did not go further to delve into Turkish politics and the Gülen Movement's role in it.

On Dec. 17, the alleged corruption probe, the alleged gold trade with Iran and the allegations that Turkey helped al-Qaeda in Syria were put together. It was clear that the Gülen Movement, which had a secret agenda, had attempted to topple the ruling government through promoting any allegation that would be useful. Suddenly, these reporters thought of it as an ordinary corruption probe with no religious organization working insidiously.

Following the Dec. 17 operation, the negative impact on the Turkish economy was displayed as if the markets in Turkey were in big trouble. The short-term negativity was presented as if it would continue for a long time, yet, the Turkish economy recovered in less than three months.

It is true that Erdoğan's rhetoric is harsh and may ignite anger from others, yet Turkey is a state with a cabinet, institutions and civil society organizations. The AK Party's voters, as we showed in Daily Sabah, make their choices for several reasons. It is misleading to analyze Turkey only through Erdoğan and his speeches. In their reports, these reporters do not refer to any other politician but Erdoğan and do not quote ordinary Turkish people. They also do not endeavor to understand the nature of Turkish politics and the reasons that Turkish voters vote the way they do.

Media critic and Daily Sabah's ombudsman İbrahim Altay would like to ask these reporters who claim that Turkey is an autocratic country and Erdoğan is a dictator and debate the AK Party may lose in the elections, what are your sources? What do you base your claims on? What kind of journalistic understandings do you have, because your reports only target the government rather than honestly reporting objectively from Turkey?
RELATED TOPICS