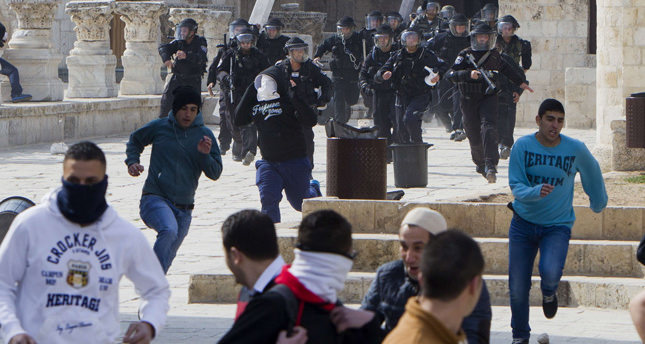 As part of the security measures, male residents of Jerusalem would face age restrictions, said police spokesman Micky Rosenfeld.
"For men, only those aged 50 and over are allowed to pray, and women of all ages," he told AFP.

"It's a precaution that has been taken after a security assessment of the possibility of disturbances."

Five people were arrested on Sunday when Palestinians and Israeli police clashed at the compound in the walled Old City.
Police said rioters threw stones and a number of Molotov cocktails and officers responded with stun grenades.

An AFP journalist said members of the Palestinian movement Hamas were among the protesters at the compound. The compound houses the Dome of the Rock and the Al-Aqsa mosque, the third holiest site in Islam.

It is also the site where tradition says the biblical Jewish temples once stood and is revered as Judaism's holiest place. The police restrictions came as Jews prepared to celebrate the week-long Passover festival, starting at sunset.

As it does at major Jewish holidays, the military blocked the already limited access to Israel from the occupied West Bank, for 48 hours from midnight (2100 GMT) Sunday, an army statement said.

It said entry would be permitted to "medical, humanitarian and exceptional cases".