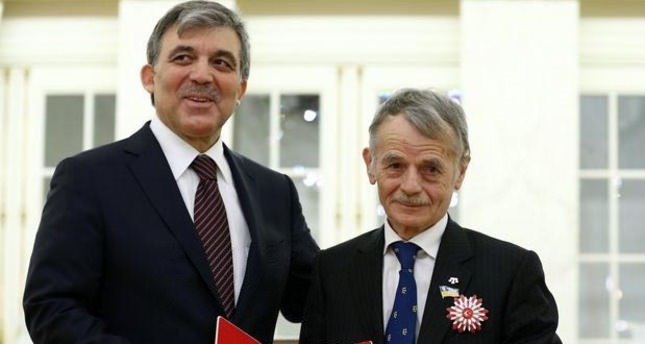 The former leader of the Crimean Tatar community Mustafa Cemil Kırımoğlu (Dzhemilev) was awarded the Order of the Republic Medal of Turkey in an official ceremony at the Çankaya presidential palace in Ankara on Tuesday.

President Abdullah Gül presented the prestigious medal to Kırımoğlu in a symbolic gesture to demonstrate Turkey's deep commitment to the well-being of the Tatars, an ethnic Turkic minority of the Crimean Peninsula.

At his formal speech at the ceremony, Kırımoğlu has expressed that the Crimean Tatar community was going through an extremely difficult period as the Crimean Peninsula has been occupied by Russian forces. Criticizing Russia's policies, Kırımoğlu noted Russia took advantage of the crisis in Ukraine and deployed its tanks in Crimean soil, an unexpected incident for Crimean people.

Kırımoğlu referred to 1944 when hundreds of thousands of Chechens, Tatars, Crimean Tatars and Meskhetian Turks were deported from their homes throughout the region while the world turned a blind eye to their suffering of these people and should not adopt the same attitude now.

"We hope that this occupation will not last long and Crimea will be free" said Kırımoğlu.

Speaking during the event, Gül stated that they plan to present the medal two years ago, but they had to postpone the plan due to tension which broke out in Ukraine last year.