Erdoğan: Courts will be Gülen-free 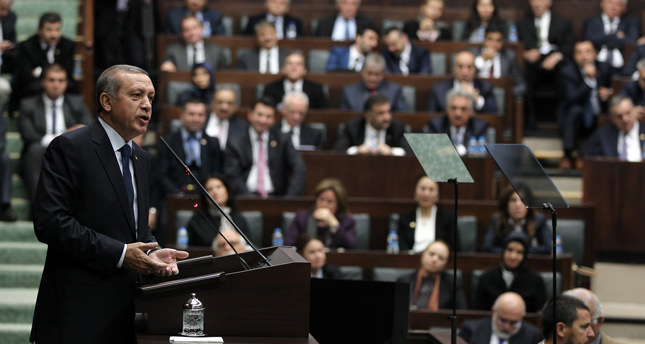 by Daily Sabah Apr 16, 2014 12:00 am
ANKARA — Prime Minister Recep Tayyip Erdoğan spoke at the Justice and Development Party (AK Party) group meeting yesterday in Ankara where he reiterated his criticism of the "parallel structure" and stressed his commitment to combatting Gülenist infiltration. "Nobody should doubt that we will clear the courthouse corridors from the gang members [Gülenists] and clear their entire network in the same way we have been clearing the halls of government from the gangs."

Referring to recent reports by some western media outlets claiming that Turkey supports al-Qaeda-affiliated groups in Syria, Erdoğan said there are calculated and malicious attempts to tarnish Turkey's image abroad. "There are ongoing attacks to debilitate our government from the outside of the country as well as from the inside. The purpose of these attacks is to calumniate that Turkey is helping terrorist organizations. Those who stop [aid] trucks and assault intelligence officers, they just did this to put Turkey in a difficult situation in the international arena.

Even the enemy would not have acted like a coward. These are known circles in Turkey that brought such baseless claims to the agenda...They tried to give the impression that Turkey supported the chemical attack in Syria and al-Qaeda. We are closely following the incidents in which trucks belonging to the MİT (National Intelligence Organization) [were stopped] and the eavesdropping scandal of the Foreign Ministry," the prime minister added.

Erdoğan also remarked that such media reports will not harm Turkey's reputation. "We are in the world with our peaceful foreign policy and will continue to exist.

All the news reports and comments that try to show how Turkey cooperates with terrorism and terrorist organizations will not harm our reputation at all." Regarding claims of polarization, Erdoğan said he has never been in favor of political tension. "In the last 12 years, we have served the people equally and represented them all. We reached out our hands [to the opposition] but they retaliated with their fists and fled."

Erdoğan also touched upon the Gülen Movement's recent black propaganda efforts in the U.S. "An ugly and despicable smear campaign against Turkey is being carried out. They have continued their black propaganda efforts in the U.S. They sent letters to countries, cooperated with representatives of the Armenian lobby and even gave them financial support." Concerning the upcoming presidential election, Erdoğan said he will not allow the presidential election to be manipulated into a crisis. "We want Turkey to carry out the presidential election and 2015 general election peacefully and democratically. In order to achieve these goals, we will fight sincerely,"
Erdoğan said.
Last Update: Apr 16, 2014 3:04 pm
RELATED TOPICS