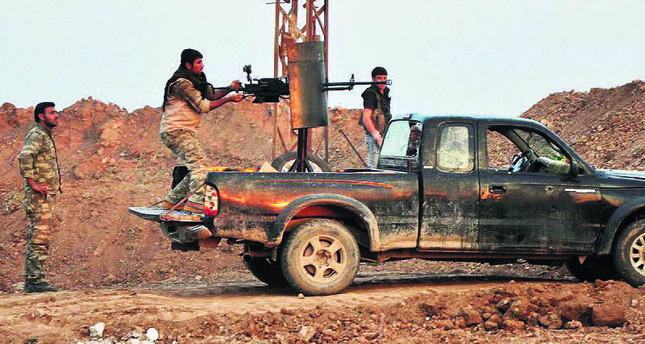 Daily Sabah investigates ISIL, which has become a threat for the whole region while it undermines the legitimacy of the Syrian opposition

EXETER — The Islamic State of Iraq and the Levant (ISIL) is a group swiftly approaching an internationally recognized level of infamy and becoming a threat for Turkey as its members have been carrying out operations in Turkish border. Although it has been active in one way or another in Iraq for many years since the 2003 U.S.-led invasion introduced such terrorist groups into the country, it is the group's activities in al-Sham, or the Syrian Levant, that have captured the world's attention. It is now entrenched not only in battles against Bashar Assad's regime in Syria, but also waging bloody battles against other rebel groups who are opposed to his Ba'athist dictatorship. So, who are these people who are so extreme that even the al-Qaeda fanatics have rejected them?

Under the leadership of Abu Musab al-Zarqawi, a radical Jordanian Salafi, the group entered Iraq after Saddam Hussein was toppled from power and established itself as a Sunni Salafi militant group that adhered to the ideology of al-Qaeda. This ideology is largely based on the establishment of a global Islamic Caliphate founded on an extreme interpretation of Islamic jurisprudence. Rather than direct political engagement, al-Qaeda in Iraq (AQI), as the group came to be known, decided that the system introduced by the Americans in Iraq was "haram" (impermissible) under Islamic law and therefore must be brought down through the use of force. Although AQI had Iraqi operatives, a large percentage of its manpower actually consisted of foreign extremists who came to Iraq to wage jihad, whether the Iraqi people wanted them to or not. Even if many of these international militants were not originally members of AQI, they were obliged to rely on them as most could not speak Arabic and also needed Zarqawi's contacts, network and resources in order to more effectively conduct their operations against the invading Western forces in Iraq. This reliance, combined with a similar ideology, ensured that they would remain loyal and could be easily assimilated into the growing organization of AQI. Thus, even after Zarqawi was killed by a targeted American airstrike in 2006, AQI was sufficiently organized to continue to pursue deadly operations against all its enemies, including its fellow co-religionists, the Sunni Arabs of Iraq.

In late 2006, AQI began using the new name of the Islamic State of Iraq (ISI). As the name suggests, this is the first incarnation of this group before it eventually evolved into the group which we now know as ISIL. This change of name more accurately reflected the aims and objectives of this al-Qaeda affiliate as it attempted to establish an emirate in the Governorate of Anbar, and also represents an increase in the ferocity and violence of the group's attacks.

ISI never shied away from using suicide bombers, and they would use them to bomb civilian areas indiscriminately.

Many of these attacks were against Shiite civilians, and by declaring them heretics ISI was attempting to ignite a larger sectarian conflict by encouraging retaliations from other sectarian groups such as the Iran-backed Shiite militias of the Mahdi Army and the Badr Brigades.
Although these sectarian Shiite militias did not need an excuse to perpetrate violence against Sunni civilians, it still served to polarize Iraqi society and entrench feelings of enmity and hatred against fellow citizens. ISI was not just content with branding the Shiites as heretics; it also extended this label to Sunni Arabs who did not agree with its ideology.

The group was repeatedly and openly criticized by other Sunni resistance groups who were fighting the Americanled occupying troops, such as the Islamic Army in Iraq, for their tactics that led to the deaths of many Iraqi civilians.

This was the first sign that ISI was more extreme than their al-Qaeda brethren elsewhere in the world, as ISI had no qualms about attacking fellow Sunnis in large numbers.

The group's violence against the Sunni community caused it to lose significant ground in Sunni areas, and culminated in the formation of the Sunni Awakening, an alliance of many Iraqi Sunni Arab tribes that began to engage ISI in Anbar and other Sunni majority Iraqi governorates. The Awakening was successful in defeating ISI, but rather than capitalizing on this demonstration of religious and political moderation by the Sunni tribes, the sectarian Shiite government of Iraqi Prime Minister Nuri al-Maliki instead exacerbated tensions once more by continuously marginalizing the Sunni population and persecuting it solely because of its sect. As such, ISI managed to survive due to the increasing distrust and anger of the oppressed Sunnis when it could have easily been destroyed if the Iraqi government had adopted a more moderate stance. Although ISI is an extremist Sunni group which is ideologically committed to killing Shiite Muslims, a WikiLeaks report referenced by many reputable newspapers suggests that Iran, itself a fundamentalist Shiite state, has supported ISI. According to the report, Iran was involved in supplying new kinds of explosives to ISI which, as we have previously established, is allied with al-Qaeda. This indicates that Iran has a vested interest in propagating a state of chaos and hatred in Iraq (and now also Syria) by promoting extremist groups from both Sunnis and Shiites. With Iraq in turmoil, it will almost inevitably tear itself across sectarian and ethnic lines, while further pushing Iraqi Shiites to look toward a strong, stable Iran for support, thereby ensuring their loyalty and guaranteeing the maintenance of Iran's strategic chain that stretches from Iran to the Mediterranean. Since the explosion of the Syrian revolution against the Assad regime, ISI has once again metamorphosed and this time into the Islamic State of Iraq and the Levant. How it became ISIL, and what it is doing in Syria, will be addressed in the second part of this report.
Last Update: Apr 17, 2014 1:22 pm
RELATED TOPICS