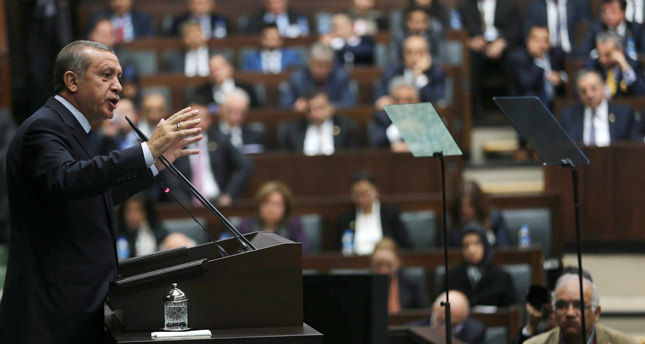 Prime Minister Erdoğan asked his parliamentary deputies to pick a name to support as presidential candidate, gets full support for a presidential run or a fourth term as PM

AK Party spokesman Hüseyin Çelik commented on the consultation meeting and said that the final decision on presidential elections and the three-term rule will be reached at the extended Provincial Chairpersons' Meeting due in April, 18 and then it will be discussed at the 22th Consultation and Evaluation meeting.

Çelik said, "The AK Party is the only political movement that managed to become Turkey's political party. Turkey's desire is our [AK Party] desire. Regarding journalists' questions on the survey, Amasya Deputy Naci Bostancı said, "Politics is related to current, party-determined conditions. That's why if the prime minister was to run for the presidency, he will be directly elected." He stated that Erdoğan's presidency occupies not only his but also the entire nation's mind. Pointing out that different factors should be taken into account in politics, Bostancı said, "If the prime minister did not yet make a clear explanation, I am pretty sure he will follow a strategic path considering all the possibilities."

He further noted that the three-term rule should be evaluated in light of current conditions as much has changed since its implementation. "Turkey is a dynamic country," he explained. "The conditions when the AK Party established the rule are different than today. I think the abolishment of the threeterm rule is suitable but there is a constitutional rule regarding the right to vote and stand for election. I assume that we will evaluate it."

AK Party Diyarbakır Deputy Oya Eronat commented on the AK Party's three-term rule and said the party's authorities will decide on the rule but members will support Erdoğan if he decides to be a candidate for the presidential elections. In response to the question whether there is an AK Party candidate that he will support in the presidential elections, AK Party Ağrı Deputy Ekrem Çelebi said, "My candidate of choice is our prime minister." Noting the three-term rule's abolishment is up to the party's authorities, Kahramanmaraş Deputy Mehmet Sağlam stated that the three-term rule will be discussed at the meeting. As a former rector at Samsun 19 Mayıs University, Sağlam elucidated on the rule by saying, "At universities, there was a rule that prevents rectors from an official post for two consecutive terms and it helped the youth to take Office. But I do not know how it applies to political parties."

Gümüşhane Deputy Feramuz Üstün said, "The candidate that I want to run for the presidential elections is someone who will continue to compromise. I believe that we [the AK Party] will manage this and there will be no crisis. The nation expects stability and the message that we gave during the election period also ensures stability." When a journalist asked whether he meant Erdoğan when he said "stability," Üstün said, "Of course, I mean him [Erdoğan]. In my personal opinion, I will resolutely support the prime minister if he wants to run for president, but we will also respect the decision of our party."

On the AK Party's three-term rule, Üstün said he did not find the rule healthy and limiting a political figure that is loved by the nation is not rational. When asked if there is the possibility of the AK Party to lose support if Erdoğan decides to run for the presidency, Üstün said, "The nation's perception regarding our prime minister is different. Through his leadership capability he unifies with the nation."

Commenting on the possibility that under an Erdoğan presidency, current president will serve as prime minister, Üstün said that under either Erdoğan or Gül's presidency, the AK Party will manage to compromise and keep being successful.