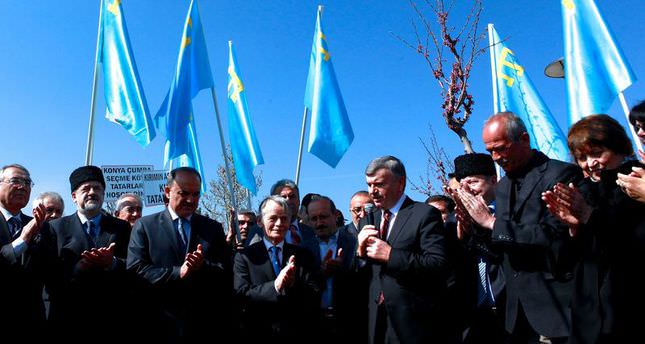 by Ali Ünal Apr 17, 2014 12:00 am
ANKARA — With the escalating conflict in Ukraine continuing to develop on an almost hour-by-hour basis, Turkey assured Crimean Tatars that they are determined to take all necessary steps to ensure the safety and security of Tatars. Russia annexed the Crimean peninsula last month, a decision rejected by the international community. Tatar leader Mustafa Abdülcemil Kırımoğlu met with Prime Minister Recep Tayyip Erdoğan and President Abdullah Gül on Tuesday in Ankara. According to sources from the Prime Ministry, Kırımoğlu and Erdoğan evaluated the latest developments and have determined a road map that includes measures for the security of Crimean Tatars.

According to sources, the safety of the Crimean Tatars is an important part of the road map. Thus, in order to provide security of life and property, Turkey will continue its active diplomacy efforts, especially with Russia and other countries. Tatars began returning from exile after the 1991 collapse of the Soviet Union. However, due to the current situation in Ukraine, returns from exile have almost stopped. In the meeting Prime Minister Erdoğan assured the Crimean Tatars that they would provide all the necessary support to encourage the continuation of Tatars returning to Crimea from exiled lands. In this context, Turkey will provide all the necessary aid for Tatars for their adaptation to social and economic life. Moreover, logistical support will be given to all foundations that provide aid to Tatars. In addition, the Turkish International Cooperation and Development Agency (TİKA) will be more effective in the Crimean peninsula.

In accordance with decisions taken at the meeting, Tatar leader Kırımoğlu stated yesterday that they would continue to fight in a diplomatic way. Regarding the question about the latest developments in Ukraine, Kırımoğlu said, "We will continue our fight but not with armed struggle, but will continue in a diplomatic way." A few weeks ago, the Crimean Tatars' assembly voted in favor of seeking "ethnic and territorial autonomy" for the indigenous minority on the Black Sea peninsula annexed from Kiev by Moscow. On April 12, the pro-Russian Crimean parliament produced a new constitution officially declaring the peninsula as part of Russia following a referendum in mid-March, in which the vast majority of voters opted to join Russia. After becoming a part of Russia, Russia announced plans to issue Russian citizenship to all people in Crimea except those who wished to remain as Ukrainian citizens, and these developments raised the concerns of Crimean Tatars. The population of Crimean Tatars is up to 300,000, which makes them one of the biggest minorities on the Crimean peninsula.
RELATED TOPICS