Gül: I don’t have any future political plan 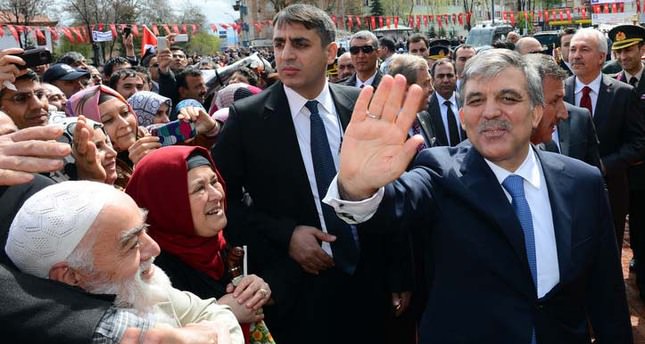 by Daily Sabah Apr 18, 2014 12:00 am
KÜTAHYA — President Abdullah Gül commented on Turkey's upcoming presidential elections during his visit to Aegean province in the western city of Kütahya on Friday.

During his visit Gül stated that he does not have any political future plan under the current circumstances."We will come to a decision after discussing the matter. Turkey has democratic capability to handle any issue, our future is always bright," Gül replied to questions concerning the August elections.

Referring to a question if a "Putin-Medvedev model" might be conceivable, Gül said such a formula would not be "appropriate" for Turkey. Russian Prime Minister Dmitry Medvedev was appointed in 2012 by president and former prime minister Vladimir Putin.

A similar dilemma presented itself to Vladimir Putin in 2008 in Russia, where the constitution barred him from a third consecutive term as president. Putin instead backed his former campaign manager, Dmitry Medvedev, for the job, and when Medvedev won, he appointed Putin prime minister. Putin returned the favor four years later, when he won the presidency again. But on Friday, Gul appeared to cast the idea of a taking part in similar swap.
Last Update: Apr 19, 2014 4:52 pm
RELATED TOPICS