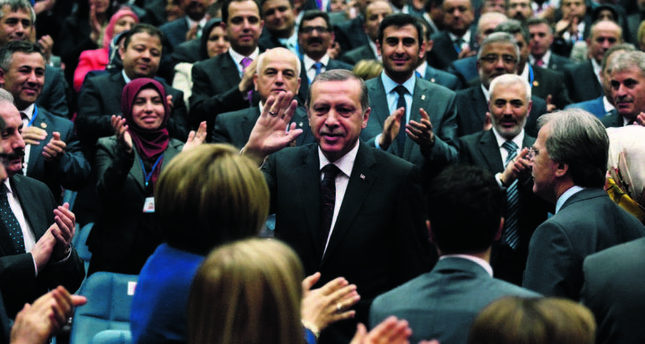 by Daily Sabah Apr 18, 2014 12:00 am
ISTANBUL — Speaking at his party meeting with presidents of AK Party branches across Turkey, Prime Minister Recep Tayyip Erdoğan announced that a new electoral law increasing the number of constituencies will be presented in the Parliament soon. The new electoral system will divide cities into smaller areas and voters will be able to vote for candidates who represent their districts in the Parliament. In other words, instead of choosing deputies as representative of huge constituencies, every deputy will be representing smaller constituencies and fewer people.

As an example, Istanbul, which has been divided into three constituencies will be divided into 81 constituencies. The AK Party is aiming to let the winning party gain more seats in the Parliament and establish more direct contact between the voters and deputies. Erdoğan said the new system will be applied to the next general elections, which will be held in 2015. Erdoğan also spoke about the Gülen Movement which orchestrated the Dec. 17 operation against the government, saying that "those plotting against us are out of politics. They have not avoided using any illegitimate means to attack on us." He stated that the AK Party has responded to those attempts to tarnish its legitimacy, through its success in the last local elections. Erdoğan congratulated AK Party members for their work before the elections as well as the elected mayors and the presidents of the AK Party branches.

Erdoğan also criticized opposition parties, saying that the Republican People's Party (CHP) lost blood after allying with the Gülen Movement ahead of the elections. Erdoğan said the CHP had nothing to offer people, has not worked to serve the people and does not have any ethical or political principles as evidenced by the release of illegally obtained and doctored wiretappings of top AK Party officials.

He said that "any election in Turkey's history has not been as tough. They tried to decrease our votes to 30 percent. But, any party, except the AK Party did not draw a pathway for Turkey. But the AK Party is the party, planning to shape Turkey's future in a more democratic way.

What happened before the local elections will not be forgiven. Attacks on the Turkish Republic will be punished and our people authorized us to do so." Erdoğan also talked about the upcoming presidential elections, which will be held in two stages on Aug. 10 and Aug. 24."We will be successful in both general and presidential elections… we will consolidate the stability, peaceful atmosphere and prevent any chaotic situation to let people elect the president." After stating that the presidency brings with it serious responsibility, Erdoğan concluded by saying, "a peaceful presidential election will be inherited by the next generations. We will forget the pains that were experienced in the past and democracy will flourish in a stronger way in Turkey."