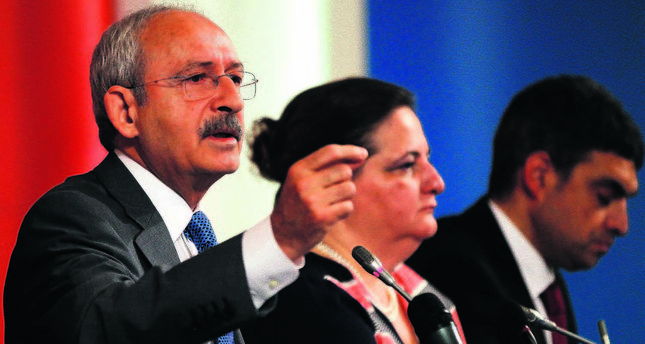 Blaming the leadership for cooperating with the Gülen Movement, some senior members call for major changes to renew trust in the CHP

ANKARA — The main opposition Republican People's Party's (CHP) efforts to jump on the anti-government Gülenist bandwagon and its subsequent failure came to the fore at the Party Assembly meeting at party headquarters in Ankara on Friday. CHP leader Kemal Kılıçdaroğlu has faced the wrath of those disappointed with the poor election results since March 30. Speaking at the meeting, Kılıçdaroğlu criticized government policies, the new law expanding the powers of the National Intelligence Organization (MİT) that passed on Thursday and universities for not censuring the government, but failed to comment on the local election results or opposition voices within his party.

Addressing the assembly, Kılıçdaroğlu dismissed allegations that his party was moving to the right while stating, "Recent developments have gone beyond left and right."

The meeting of the assembly, a 60-member board in charge of setting party policies, was held against the backdrop of heavy criticism directed at Kılıçdaroğlu, whose opponents claim it was a mistake for the main opposition party to welcome Gülenist support and move away from its core principles including secularism and class politics.

Deniz Baykal, who was forced to quit as party leader in 2010 because of a sex scandal only to be replaced by Kılıçdaroğlu, on Thursday accused the party leadership of making "crazy mistakes."

Baykal, currently serving his eighth term as Antalya representative, said: "We warned the party leadership prior to the elections.

We need to learn our lessons here and build the correct mechanisms to get back on our feet. The party is in need of renewal." The AK Party's victory in the Antalya mayoral race was portrayed as one of the CHP's significant defeats in the local elections on March 30.

Baykal said the party didn't have the luxury of time on its side, noting that a new strategy was needed because there would be national elections next year.

Echoing the former chairman's sentiments, minority whip Muharrem İnce, a champion of Kemalist hardliners within the main opposition party, argued that the election results, which he described as a failure, had shown the party that it failed to identify the right candidate in many places. İnce criticized the leadership's preference for former nationalists, especially in the capital, Ankara, as the party's mayoral candidates, adding, "There is a disease in this party, where leaders don't trust their own children, hoping for salvation from those outside."

Kılıçdaroğlu was also under fire from the female deputies of his party, with whom he met on Thursday. According to several media outlets, Emine Ülker Tarhan, a staunch secularist who served as minority whip between 2011 and 2013, argued that the elections marked a defeat for the party and called upon the leadership to hold those responsible for the situation accountable without further delay. Furthermore, Tarhan and others allegedly stated that the leading factors contributing to the CHP's poor performance were the party's alliance with the Gülen Movement and a series of misguided decisions to pick right-wing politicians over CHP members in key mayoral races.

Over the past months, professor Birgül Ayman Güler, a member of Parliament for İzmir, who was notably absent at Thursday's meeting, had repeatedly criticized the CHP leadership's cooperation with the Gülen Movement. Arguing that the main opposition party had worked with power players that eventually proved damaging to the party, Güler described the party's attempts to forge such alliances as "very unfortunate."

Speaking to Daily Sabah, the party's Antalya deputy, Yıldıray Sapan, was equally scathing of the party leadership's strategy, accusing it of formulating election strategies in accordance with orders received from Pennsylvania, in reference to the Gülen Movement's shadowy leader, Fethullah Gülen, who resides there. "We saw what was going to happen and warned the leadership but they didn't accept what we said as the truth. That's why we lost Antalya," he said.

The president of the respected polling company GENAR, Mustafa Şen, described to Daily Sabah what was happening as a serious reckoning, predicting a bitter clash followed by cleansing within the party. "I believe Baykal is not speaking for himself alone. He is a former leader who was forced to resign through dirty plots. He will want his revenge. For the current leadership, the election results are both a political and moral defeat," said Şen.

Still, there are some deputies who portrayed the current squabbles within the CHP as a normal review of an election defeat, something taken out of context by the media and experts who are not used to a democratic process within a political party.

The CHP's other Antalya deputy, Gürkut Acar, told Daily Sabah the debates within the party were nothing out of the ordinary and that he didn't expect anything drastic to happen. "We are upset at having lost in Antalya. We haven't yet discussed what the election defeat means for us, even amongst ourselves. There is no need to divide the party. The CHP needs time," he said.

CHP's deputy Aykan Erdemir from Bursa was equally content with the party's internal mechanism, telling Daily Sabah that Turkey was not used to a transparent discussion of political agendas within a party. "Intra-party democracy is key to a democratic country," he said, adding that he viewed the current debates as positive.