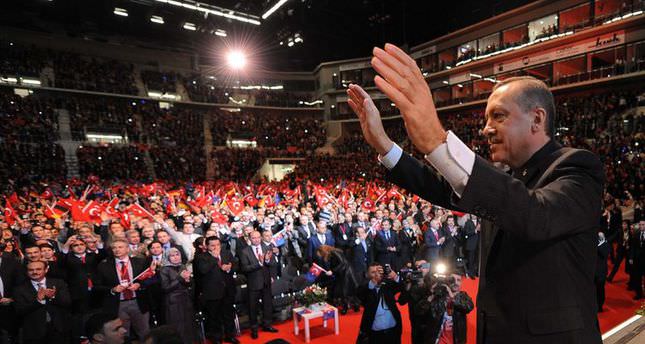 ISTANBUL — Following legal amendments in 2012 allowing Turkish citizens living abroad to vote in the upcoming Aug. 10 presidential election, this presidential race will be the first one to be decided by a popular vote. As part of his election campaign, Erdoğan is preparing to visit European countries in May to address Turks residing in countries such as Germany, France and the Netherlands.

Figures from the Supreme Board of Elections (YSK) suggest that there are 2.6 million voters living abroad, including 1.5 million Turkish citizens in Germany and 85,000 in the U.S. These numbers make up 5 percent of all voters, which stands at nearly 50 million for the upcoming presidential election. In previous elections, Turkish citizens were required to vote on the borders and at airports since there was not yet an amendment regarding their voting rights.

According to previous figures, 7 percent of Turkish citizens living abroad, or 2.6 million people, voted on Turkey's borders, yet this percentage is expected to increase to 95-97 percent through the latest amendment.

As the YSK suggested, people will have four days to vote from Aug. 7 to 10. Since the amendment over presidential elections requires a second round if a president is not elected with a clear majority in the first round on Aug. 10, Turkish citizens will be able to return to the ballot boxes between Aug. 21 and 24 for a second round of voting.

It is further reported that Turkey is holding talks with sport facilities, schools and fairgrounds administrations in countries such as Germany, France and the Netherlands with significant numbers of Turkish citizens residing, in the event Turkey's diplomatic buildings in these countries are not adequate. Turkish citizens can check their registrations on YSK's website. For those who have no registration, they can update their registrations declaring their addresses through their relevant consulates.

Sabah's European Branch Editor-In-Chief Mikdat Karaalioğlu said that political and economic improvements in Turkey are able to affect voters living in Europe directly. He stated, "Voters are able to see the difference between the pre-AK Party era and today, as they are away from the heavily crystallized political atmosphere…Also, Erdoğan's charismatic stance on the Europeans makes Turks proud, as Turkey and its people were treated as second-class citizens previously. But today the strong Turkish economy and rapid democratization are considered as positive steps by the European Turks. Also the AK Party has increased its votes, especially in Germany after the reconciliation process with Kurds and the amendments of Alevi people's rights."

A total of 2,767,981 Turkish people living abroad in 182 countries will be casting their votes in the upcoming presidential elections to be held in August 2014, according to the Office of the Prime Minister.

In the Middle East, there are 2,238 Turkish voters in war-stricken Syria, 4,574 in Israel, 86 in Palestine and 48 in Jerusalem. The Turkish government is currently in the process of preparing a plan to establish a stable and secure environment for citizens to vote in dangerous regions such as Syria and Ukraine, where there are 1,870 Turkish citizens.
Last Update: Apr 22, 2014 1:00 am