Freed journalists back in France 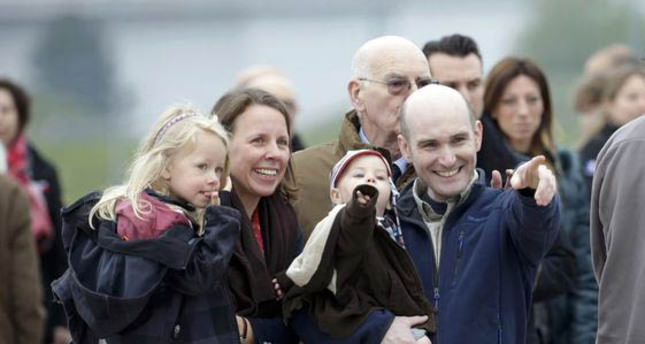 Freed after being held hostage in Syria for 10 months, four French journalists, including Nicolas Henin (above), who were found by Turkish soldiers on the border, arrived back home yesterday to be greeted by their families and French President Francois Hollande

GAZİANTEP — Four French journalists who were brought to Turkey after 10 months of being held hostage in Syria have finally arrived in their home country. The group, who were kidnapped in June, were released and travelled into Turkey earlier on Saturday, where they were welcomed by Turkish army officials in the southern border province of Şanlıurfa. Edouard Elias, 22, Didier Francois, 54, Pierre Torres, 29 and Nicolas Henin, 38, first rested at a hotel in Gaziantep, a Turkish city bordering Syria, and then moved on to Gaziantep Airport where they boarded a French Air Force plane. French President Hollande said that the men would be taken to their homes after a medical checkup.

Earlier, Turkey's Foreign Minister Ahmet Davutoglu talked to the four by phone to "share their happiness" following their release. Hollande said in a statement that the men were in good health, "in spite of the very grueling conditions of their captivity."

Didier Francois, a senior war correspondent working for Europe 1 radio, and Edouard Elias, a photographer, were kidnapped in early June on their way to the Syrian city of Aleppo. Nicolas Henin, who was working for Le Point magazine and Pierre Torres, reporting for French-German television channel Arte, were taken later that month. It is not clear who or what groups kidnapped the journalists. As the Syrian conflict enters its fourth year, the country has become the most deadly for journalists who are regularly kidnapped and murdered, human rights groups say. On March 3, France-based Reporters Without Borders released a report containing the names and countries of journalists who have disappeared or been abducted around the world. Currently, the list for Syria includes 22 journalists, 12 foreigners and 10 Syrians.
Last Update: Apr 21, 2014 9:47 am