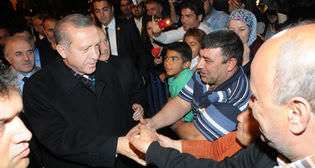 Recent polls by the Ankara-based Objective Research Center show that AK Party supporters are unified over the party's presidential candidate, while CHP supporters remain mired in an internal party rivalry

ISTANBUL — Ahead of the Aug. 10 presidential election marking the first time a president will be elected by a popular vote, Daily Sabah presents the latest results from the Objective Research Center's (ORC) poll that shows striking insight into the upcoming presidential election.

Speculation and debate rages about who Turkey's next president will be as the country continues its political transformation with signs of a semipresidential system.

While Prime Minister Recep Tayyip Erdoğan's candidacy is expected by some AK Party supporters, many are still wondering if opposition parties will manage to nominate a candidate on their own or seek support for a joint candidate.

According to ORC's poll, which was important in showing the public opinion of the March 30 local elections, 51.2 percent of the 5,680 people surveyed in 42 cities stated they will vote for Erdoğan if he decides to run; whereas 40.5 percent said that they will not vote for him and 8.3 percent are still undecided.

Eleven percent of those surveyed chose not to state an opinion.

The main opposition Republican People's Party (CHP) has been occupying the political agenda with the party's internal rivalry since the local elections. Following the CHP's failure in the local elections mostly due to its alliance with the Gülen Movement, the CHP's former leader Deniz Baykal, who was discharged from the party due to a sex tape scandal, led calls for reforms within the party. In discussions with key CHP figures to pave the way for further reforms within the party, Baykal is looking for support from CHP's grassroots. Touching on the internal rivalry within the party, ORC asked CHP voters who should be CHP's presidential candidate. Of the CHP voters surveyed, 15 percent stated that CHP should nominate Deniz Baykal, whereas 12 percent said current party leader Kemal Kılıçdaroğlu should be the candidate. The poll indicates that CHP supporters want to see their former leader Baykal as president, rather than current leader Kılıçdaroğlu.

CHP Deputy Chairman Muharrem İnce, former Chief of General Staff İlker Başbuğ and head of the Turkish Bar Association, Metin Feyzioğlu followed Kılıçdaroğlu according to the polls. A large proportion of 43.3 percent of CHP voters refused to comment on the party's presidential candidate.

When the question of who should be the Nationalist Movement Party's (MHP) presidential candidate was posed to opposition voters, 32.4 percent said Turkish Grand National Assembly (TBMM) Deputy Chairman and MHP deputy Meral Akşener should be the MHP's candidate, whereas 30.9 percent said MHP's current leader, Devlet Bahçeli, should be nominated for the presidency. In addition, 6.8 percent of MHP voters said they will vote for someone other than Akşener and Bahçeli, and 29.9 percent chose not to state an opinion.

In response to the possibility of a joint presidential candidate for the opposition parties, 32.0 percent of those surveyed said they will vote for a joint opposition candidate, whereas 52.4 percent said they wouldn't. A total of 15.6 percent of people chose not to answer the question.

As the survey shows, the most important questions waiting to be answered in the coming months are whether Erdoğan will run for president, who will be the next prime minister if he runs and whether opposition parties will unite over a joint candidate.
Last Update: Apr 22, 2014 12:34 am
RELATED TOPICS