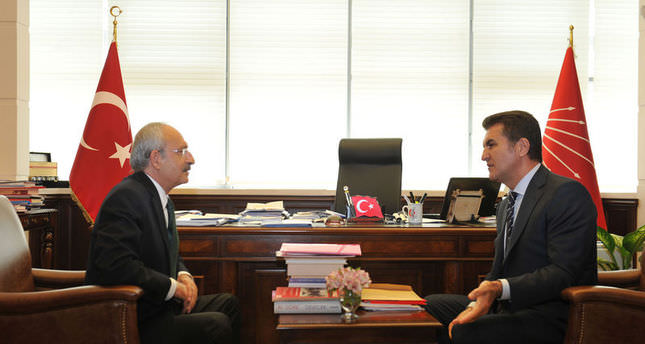 ANKARA — Turkey's main opposition party, the Republican People's Party (CHP), continues to assess the March 30 election defeat as new problems emerge inside the party. Over the weekend, the CHP discussed the election results in overly long and tense debates and Chairman Kemal Kılıçdaroğlu faced serious criticism, especially from deputies with a nationalist background and Kemalist hardliners.

According to sources, CHP officials prepared an extensive 550-page report on the election results, which accuses Kılıçdaroğlu of forming an electoral alliance with the Gülen Movement and nominating mayoral candidates with right-wing backgrounds.

The movement is accused of launching an attack against the government by exploiting its links to the police and the judiciary.

According to sources inside the CHP, Kılıçdaroğlu will lead a major revision in the party's Central Executive Board (MYK) and in provincial organizations, which seem responsible for losing the election. Moreover, Kılıçdaroğlu also started to target other people for the defeat in order to overcome intense criticism.

Turkish media outlets reported yesterday Kılıçdaroğlu blamed Istanbul mayoral candidate Mustafa Sarıgül for the election defeat in Istanbul. Kılıçdaroğlu remarked in an interview that the Movement for Change in Turkey (TDH) and CHP's provincial organizations did not work in harmony during the election campaign, and the mismatch between the two political organizations led to election defeat. Sarıgül established the TDH following the 2009 local elections. Sarıgül's plan was to turn the TDH into an actual party in advance of the 2011 elections. However, Deniz Baykal was forced to resign from CHP leadership after sex tapes were leaked, and Sarıgül's TDH decided to support the CHP in the election.

While Sarıgül discomforting CHP provincial organization is not new, it became widely known after the local elections. In addition to Sarıgül's Istanbul mayoral candidacy, Sarıgül's exwife, Aylin Kotil, ran in the Beyoğlu district and his lawyer, Murat Hazinedar, ran in the Beşiktaş district. Moreover, his son, Emir Sarıgül, ran for the city council of Şişli, where Sarıgül served as mayor for 15 years. Although Sarıgül and his ex-wife lost in the election, his lawyer was elected as mayor in Beşiktaş and his son became a deputy in Şişli.

Due to Sarıgül's questionable history with corruption allegations, his influence over the CHP leadership created dissatisfaction among party members. The CHP's Disciplinary Committee expelled Sarıgül from the party in March 2005 for serious allegations of corruption.

According to the report that led to Sarıgül's expulsion, he was accused of taking bribes from construction companies in return for approving licenses for construction. Prior to this incident, media outlets alleged Sarıgül was involved in covering up a parliamentary inquiry concerning the CASA plane crush.

In 2001, a Turkish military CASA plane crashed, resulting in the death of 38 soldiers.

Following this incident, media outlets claimed during the bidding process for the CASA planes military officers asked for a parliamentary inquiry. However, Sarıgül allegedly forged another parliamentarian's signature in order to block an inquiry into the Spanish arms manufacturer. In addition, Sarıgül's nervous attitude seems to be another problem. In 2005, Sarıgül became candidate for CHP leadership and in the convention he assaulted former Bakırköy Mayor Ateş Ünal Erzen after his allegation of corruption.

Beaten by Sarıgül, Erzen said after the attack that politics required common sense and responsibility and he thought Sarıgül was mentally depressed. A similar incident also happened just before the March 30 local elections when Sarıgül punched a Justice and Development Party (AK Party) supporter who heckled him.

According to backstage CHP headquarters rumors, Sarıgül already has plans to run for party leadership in the coming convention. Political commentators believe Sarıgül, who expressed his interest in serving as prime minister in the future several times, is likely to challenge Kılıçdaroğlu for party leadership.

According to the party charter, the CHP should expect to hold the congress on July 18. However, due to the presidential election, the congress may be postponed to September.
Last Update: Apr 24, 2014 10:43 pm
RELATED TOPICS