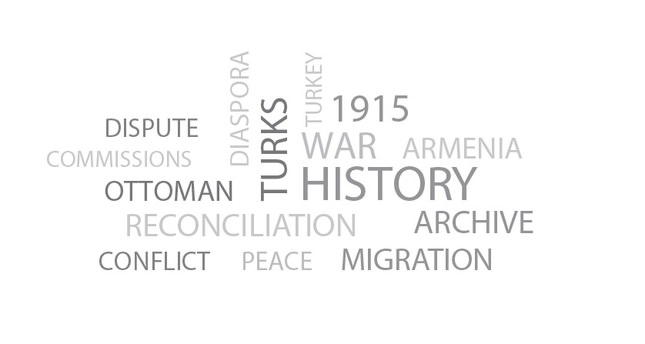 Due to the Armenian diaspora's political interests, Turkey's offer to approach the 1915 incidents from a historical and factual perspective has been refused. Yet, Turkey still favors reconciliation

ISTANBUL — The underlying factor which explains the division between the Armenian diaspora, whose members reside in other countries and Armenians who live in Armenia, is their differing approach to their national identities.

While the diaspora does not care about Armenia and Armenians' interests, the Armenians living in Turkey and Armenia have a different perspective. Turkish-Armenian journalist Hrant Dink, who was murdered in 2007, raised his concerns about the diaspora's stance on the 1915 incidents. He has repeated in his articles that Turks and Armenians would have reconciled had the process not been sabotaged by certain groups in Turkey and the diaspora, as both were privileging their own interests rather than the needs of the people. The debate over Armenian genocide claims outside of Armenia still attracts attention. Even in Turkey, conferences have been organized to discuss the historical facts. Yet, those who try to understand the incidents without calling them genocide and attempt to communicate with Turkey have witnessed the diaspora's harsh and ostracizing stance. Turkey's clear stance and contributions by nongovernmental organizations and academics to communicate and share the pain with Armenians seems to be disadvantageous for the Armenian diaspora, which considers the incidents a political issue rather than a historical one.

One of the main reasons that the Armenian issue has become complicated is that the incidents have not been seen as through a historical lens but rather through a political one. The Armenian incidents remain unsolved due to the speculative news of international media outlets during and after World War I and a lack of adequate data.

The only way to solve the problem seems to be engaging in qualified archival studies. Keeping the archives, which offer accurate information regarding the incidents, closed is not advantageous for either side. Yet the diaspora's concerns target Turkey's influence in the international arena, allowing Ankara to ignore the diaspora's demands. As such Turkey has concerns over its territorial integrity and calls for reparations, particularly as the diaspora continues to demand territory in Turkey's northeast. Such actions have damaged reconciliation attempts.

What is necessary during a probable reconciliation process is investigating state archives and consular documents while keeping political polarization, international media, legal authorities and politicians away from the investigations and research. Turkish Prime Minister Recep Tayyip Erdoğan echoed the Turkish government sentiments in 2006 and 2009 in international forums and called on Armenia to investigate those documents under the guidance of groups comprising supervisors, state officials and academics to be selected by both sides.

Yet, the Armenian diaspora rejected these offers and tried to protect its own interests, which are based on establishing relations with strong political actors through hampering Turkey's international reputation and vulgarized media sources, since any case that can be aroused which is against the diaspora's interests will be an obstacle to its political and social recitation which was established in past decades.

Another dispute between Turkey and the diaspora is based on the archives.

Although it is not moral to make assessments over the death toll, the archives will provide accurate information on those who were segregated, died, survived or relocated determined by the Ottoman officials during the migration.

The diaspora has been disseminating propaganda over the death toll claiming that 1.5 million people were murdered in a few months. Yet, the more the archives are open, the more the diaspora's claims become baseless. Turkish historians continue their research and elaborate on the incidents carefully. Yet, the diaspora prefers oral history narratives rather than archives.

Since the Turkish Republic started discussing the Armenian incident clearly, the government has demanded clarifications on the issue through historical sources but there has been no positive response from the Armenian side. Turkey, which previously claimed that Armenians killed more Turks or the death toll could be considered as normal in a time of war, has decided to reveal the facts as the archives deny the diaspora's claims.
RELATED TOPICS