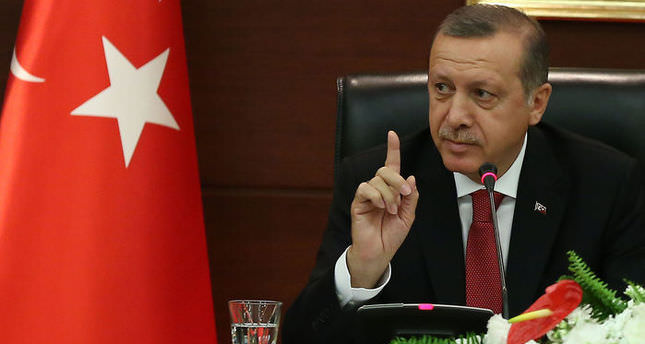 ISTANBUL — On the eve of the 99th anniversary of the Armenian incidents in 1915, Turkish Prime Minister Recep Tayyip Erdoğan on Wednesday released a historic message related to the incidents in nine languages, including Turkish, Armenian, English and French. It is the first time in the Republic of Turkey's history that the Prime Ministry has delivered such a message.

"It is a duty of humanity to acknowledge that Armenians remember the suffering experienced in that period, just like every other citizen of the Ottoman Empire," Erdoğan said in his significant comments.

The prime minister called for responsibility, saying, "The incidents of the First World War are our shared pain. To evaluate this painful period of history through a perspective of just memory is a humane and scholarly responsibility. It is our hope and belief that the peoples of an ancient and unique geography, who share similar customs and manners will be able to talk to each other about the past with maturity and to remember together their losses in a decent manner."

"And it is with this hope and belief that we wish that the Armenians who lost their lives in the context of the early 20th century rest in peace, and we convey our condolences to their grandchildren."

"The 24th of April carries a particular significance for our Armenian citizens and for all Armenians around the world, and provides a valuable opportunity to share opinions freely on a historical matter. It is indisputable that the last years of the Ottoman Empire were a difficult period, full of suffering for Turkish, Kurdish, Arab, Armenian and millions of other Ottoman citizens, regardless of their religion or ethnic origin. Any conscientious, fair and humanistic approach to these issues requires an understanding of all the sufferings endured in this period, without discriminating as to religion or ethnicity.

Certainly, neither constructing hierarchies of pain nor comparing and contrasting suffering carries any meaning for those who experienced this pain themselves. As a Turkish proverb goes, "fire burns the place where it falls."

It is a duty of humanity to acknowledge that Armenians remember the suffering experienced in that period, just like every other citizen of the Ottoman Empire. In Turkey, expressing different opinions and thoughts freely on the events of 1915 is the requirement of a pluralistic perspective as well as of a culture of democracy and modernity.

Some may perceive this climate of freedom in Turkey as an opportunity to express accusatory, offensive and even provocative assertions and allegations.Even so, if this will enable us to better understand historical issues with their legal aspects and to transform resentment to friendship again, it is natural to approach different discourses with empathy and tolerance and expect a similar attitude from all sides.

The Republic of Turkey will continue to approach every idea with dignity in line with the universal values of law. Nevertheless, using the events of 1915 as an excuse for hostility against Turkey and turning this issue into a matter of political conflict is inadmissible. The incidents of the First World War are our shared pain. To evaluate this painful period of history through a perspective of just memory is a humane and scholarly responsibility.

Millions of people of all religions and ethnicities lost their lives in the First World War. Having experienced events which had inhumane consequences - such as relocation - during the First World War, should not prevent Turks and Armenians from establishing compassion and mutually humane attitudes among towards one another. In today's world, deriving enmity from history and creating new antagonisms are neither acceptable nor useful for building a common future. The spirit of the age necessitates dialogue despite differences, understanding by heeding others, evaluating means for compromise, denouncing hatred, and praising respect and tolerance. With this understanding, we, as the Turkish Republic, have called for the establishment of a joint historical commission in order to study the events of 1915 in a scholarly manner. This call remains valid. Scholarly research to be carried out by Turkish, Armenian and international historians would play a significant role in shedding light on the events of 1915 and an accurate understanding of history. It is with this understanding that we have opened our archives to all researchers. Today, hundreds of thousands of documents in our archives are at the service of historians. Looking to the future with confidence, Turkey has always supported scholarly and comprehensive studies for an accurate understanding of history. The people of Anatolia, who lived together for centuries regardless of their different ethnic and religious origins, have established common values in every field from art to diplomacy, from state administration to commerce. Today they continue to have the same ability to create a new future.

It is our hope and belief that the peoples of an ancient and unique geography, who share similar customs and manners will be able to talk to each other about the past with maturity and to remember together their losses in a decent manner. And it is with this hope and belief that we wish that the Armenians who lost their lives in the context of the early twentieth century rest in peace, and we convey our condolences to their grandchildren.

Regardless of their ethnic or religious origins, we pay tribute, with compassion and respect, to all Ottoman citizens who lost their lives in the same period and under similar conditions."

Speaking to a TV program that aired on TV station aHaber, Turkish-Armenian journalist Etyen Mahçupyan said the government moved away from the diplomatic state discourse and got closer to the public memory. He said Prime Minister Recep Tayyip Erdoğan's message is not only a soft message pointing to remembering shared pains, but also a message that carries on the state policy.

Describing the message as a symbol of further positive steps, Mahçupyan said, "This condolence is a turning point, and positive steps should be taken in this regard. There is enough societal support for further steps. That's why it is not possible to prevent them." When asked what kind of effect this message will have in the Armenian diaspora and Armenia, Mahçupyan said most in the diaspora can find the message positive and hundreds of Armenians can respond positively to the message.

On the Armenian Republic's possible response to the message, Mahçupyan said, "Armenia is more prone to use this message in a positive way [than the Armenian diaspora] since Armenia wants to come out of its shell and to connect with the world through Turkey." He noted nationalists in both countries could not prevent the improvement of ties between Armenia and Turkey.

The head of the Surp Giragos Church Foundation, Vartkes Ergün Ayık, praised Erdoğan's historic message on the events of 1915. Ayık said the Armenian diaspora assumed Turkey stands in the same position as when they left the country, but when they arrived in Turkey, their opinion changed. "Armenians made significant contributions to these lands, but they to leave this region. Relieving their pains should be the duty of everyone living in these lands," said Ayık.

When asked to comment on Turkey's attempts to open the Ottoman archive to clarify the 1915 incidents, Ayık said everything that is needed should be done to relieve the Armenians' pain. He further said Armenians are optimistic and waiting for positive steps to be taken in the future.

Turkey's Armenian village's headman Berç Kartum thanked the prime minister for his message. He said, "I hope both sides take concrete steps to relieve the pain after this message, and as Turkish Armenians, we will be pleased with those steps." Kartum said the incidents are the issue between Turkey and Armenia and that he is against the Armenian diaspora's involvement in the issue between these two countries.
RELATED TOPICS