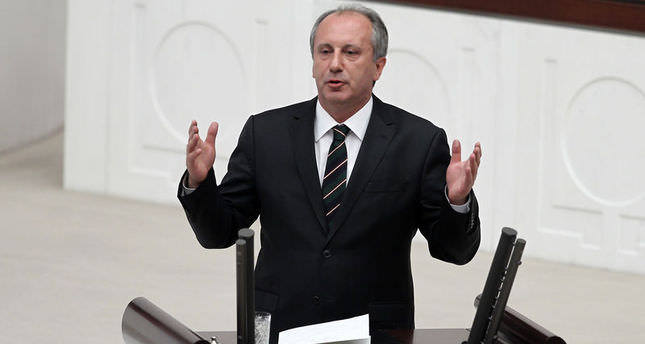 The CHP's election defeat continues to reverbrate within the party, with the latest criticisms coming from the deputy head of the parliamentary group

Over the weekend, the CHP discussed the election results in long and tense debates where Kılıçdaroğlu faced serious criticism, especially from deputies with a nationalist background and Kemalist hardliners. According to sources, CHP officials prepared an extensive 550-page report on the election results, which accuses Kılıçdaroğlu of forming an electoral alliance with the Gülen Movement and nominating mayoral candidates with right-wing backgrounds. According to a report by Çetiner Çetin published in Turkish daily Yeni Şafak on Tuesday, further criticism came from CHP Parliamentary Group Deputy Leader Muharrem İnce.

During a party meeting organized to discuss the election results, İnce harshly criticized Kılıçdaroğlu and the party administration for its insufficient and poor election policies. He addressed Kılıçdaroğlu, saying, "You demanded help from the right wing, as did the former Chairman and Antalya Deputy Deniz Baykal, without gaining any results. Even the survey company working for us advised us to reduce the number of Kemalists in the party."

Touching on the upcoming presidential election, İnce declared his opposition to the names that were raised as possible candidates, such as businessman and former politician Ümit Boyner. "The CHP has nothing to do with [Boyner]. If the CHP, which has 131 seats in the Parliament, cannot agree on a candidate, it means we did not accurately choose the deputies in the last general elections of 2011," he said. "We did nothing against Erdoğan's propaganda. We did not even publish a brochure telling the historical facts.

Speaking on the Alevi and Kurdish issues, İnce accused CHP policies of being unconvincing or non-persuasive.

Finally he expressed his concerns for Turkey's political future and claimed that the Nationalist Movement Party (MHP) may become the main opposition party, which means the end of the CHP.
RELATED TOPICS