Baseless allegations by Hersh and Fisk target Turkey over Syria 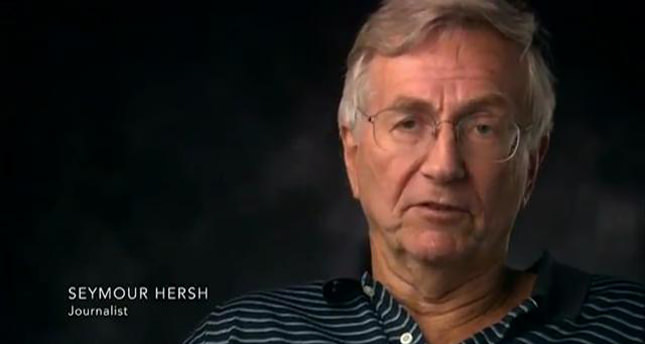 ISTANBUL — Since U.S. President Barack Obama did not take action when the red line was violated by the Bashar Assad regime using sarin gas in Damascus' suburbs last August, Turkey stood alone as the most eager opponent of the regime.

After the pro-opposition countries' failure to end the war and prevent extremist groups from becoming involved in the war, black propaganda was initiated against Turkey to cover up the failure and to portray Turkey as the only country responsible for the failure.

Besides the claims asserted by Seymour Hersh and Robert Fisk that accused Turkey of using sarin gas to prompt the US to launch a military intervention, many others started claiming that Turkey was one of al-Qaeda's helpers as al-Qaeda's Syrian branch, the al-Nusra Front, has become the strongest opposition group in Syria. It was claimed that Prime Minister Recep Tayyip Erdoğan's Turkey (as if Turkey is ruled by only Erdoğan, as is North Korea by Kim Jong-un) had started using illegal means to topple the al-Assad regime. Also Turkey's policies towards Twitter, YouTube and the Gülen Movement, headed by U.S.-based controversial imam Fethullah Gülen, were used to portray Turkey as an autocratic country. Many media outlets claimed that the Justice and Development Party (AK Party) was going to lose the March 30 local elections or, at least, that its votes were going to decrease. But Erdoğan gained 45 percent and increased his votes. After this prediction failed, the focus was turned on Turkish foreign policy again.

A new completely baseless allegation emerged, claiming that Turkey organized opposition groups to massacre and displace the Armenians living in the Syrian town of Kasab, which was captured by the opposition two weeks ago. I traveled to the region to investigate the situation of the Armenians and their churches and property. Yet, what I witnessed was completely different from that which was alleged. The opposition had not touched the churches, the cemetery and Armenian property. Yet, some of them were damaged, as the war continues and the al-Assad regime continuously bombs the town.

I interviewed one of the top officials of the Free Syrian Army (FSA), Fedaa Majzoub, who organized the evacuation of the Armenians from the town, first to a safe village and finally to Turkey. He said, "Opposition groups have nothing to do with the Armenian population. We captured the town as a part of our war strategy. We are trying to go down to Latakia to increase the pressure on Damascus. Young Armenians and Arabs left the town. We helped the old people and sent them to Turkey." When I was travelling around the town, I saw that the houses had not been ruined. The only problem was that the town has become one of the fronts of the war after three years, as the opposition could not reach Damascus through Aleppo. As a result, the only other way is to capture Kasab, reach Latakia and tighten al-Assad's maneuvering capability. Majzoub also added that Turkish officials welcomed and helped the Armenians during the evacuation process. After leaving Kasab, I went to Turkey's only ethnically Armenian village Vakıflı in the Hatay province where the Armenians were settled. When I interviewed the village's headman, he said that the village would accommodate the Armenians until they are able to return. He also added that the government provided all kinds of help. I also spoke to the Armenians who were evacuated from Kasab, and what they told me confirmed the opposition groups' claims. They said the opposition groups did not mistreat them but helped them instead to escape the bombardments.

As the anniversary of the alleged Armenian genocide is approaches (April 24), several media outlets and journalists have started raising baseless allegations to undermine Turkey's international reputation. Yet, my work on the ground and Turkey's policies refute the allegations, as Turkey recognizes al-Qaeda as a terrorist organization, it has never been officially proved that Turkey helps opposition groups militarily and the evacuated Armenians refuted the massacre allegations. It is a fact that Turkey supports the opposition politically and the refugees logistically. The contradiction of the claims is that Turkey is the only NATO-ally country in the region where Russia is increasing its influence by occupying Crimea and supporting the al-Assad regime explicitly.
Last Update: Apr 25, 2014 9:44 pm
RELATED TOPICS