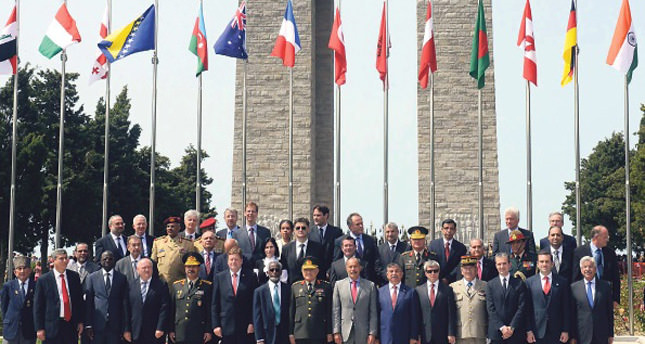 by AA Apr 25, 2014 12:00 am
ANKARA — The Gallipoli Peninsula that saw thousands die in battles during World War I yesterday played host to representatives of 32 nations, which were once enemies but developed a friendship based on mutual respect and trust. Among the many great wars in Turkey's long history, one of the fiercest battles of all time, the Battle of Gallipoli during World War I, holds a special place, not only in the Turkish nation's heart, but also in those of other nations as well.

The Battle of Gallipoli was a WWI campaign that took place on the Gallipoli peninsula during the Ottoman Empire between 1915 and 1916. Under the command of the British Empire, Australian and New Zealander soldiers formed a joint unit called the Australian and New Zealand Army Corps (ANZAC). Their aim was to capture the Gallipoli peninsula in order to open the Dardanelles to Allied navies. Their ultimate objective was to capture Constantinople, the capital of the Ottoman Empire, now Istanbul in Turkey. Anzac Day, April 25, marks the first day of the campaign. It is a national day of remembrance in Australia and New Zealand that broadly commemorates all Australians and New Zealanders who served and died in all wars, conflicts and peacekeeping operations.

Speaking to Anadolu Agency in an exclusive interview, Michael Ronaldson, Australia's Minister for Veterans' Affairs, said the freedom Australian, New Zealanders and Turks enjoy today came with a "huge price and we must never, ever forget that."The minister hailed the current Australia-Turkey ties, and said the two countries have "an extraordinary relationship." "We were enemies 100 years ago, but today we are the best of friends, this reflects very much the maturity of the two countries," the minister added.

Ronaldson pointed out that the situation was different in 1915 but it never was a matter of hatred. "We should never forget that those young Australians and New Zealanders that were going up the cliffs of Gallipoli did not hate the men at the top," said Ronaldson. "They did not know them. The men at the top, the Turks, did not know those men who were coming up the cliffs. So, this was not a battle fought out of hatred, but it was a battle of circumstances."

To commemorate the 99th anniversary of the campaign, thousands of Australians and New Zealanders have already flocked to Turkey.
For next year's centenary, Ronaldson said there would be commemorative events from the smallest towns to the largest cities across Australia. "The centennial mark of Anzac Day is an opportunity for us not just to commemorate the sacrifice of a hundred of years ago, but actually an opportunity for us to teach children that the freedom they enjoy today is as a result of the sacrifice of others, be it Turks, New Zealanders or Australians. The freedom these young people enjoy today was paid for in blood and we must never ever forget it," said the minister.

Ronaldson also spoke about work at the Ministry of Veterans' Affairs, noting there is a natural decline in the number of World War II veterans, but the ministry provides a rehabilitation program to look after the mental health of young Australians who have returned from Iraq and Afghanistan. "There are many young Australians who have served overseas since 1999. We have some real challenges but our rehabilitation system looks after those young men and women and their families," Ronaldson said.

Russell Crowe's movie "The Water Diviner," which was shot in Turkey in 2014 and tells the story of a New Zealander father in 1919 searching for his two sons who went missing in battle in Gallipoli in 1915, gives an opportunity for the two nations to tell their story very well, Ronaldson says, adding that "we understand the enormous losses that both nations suffered." "We lost a generation of young men, a generation of young Turks, Australians and New Zealanders," said the minister.