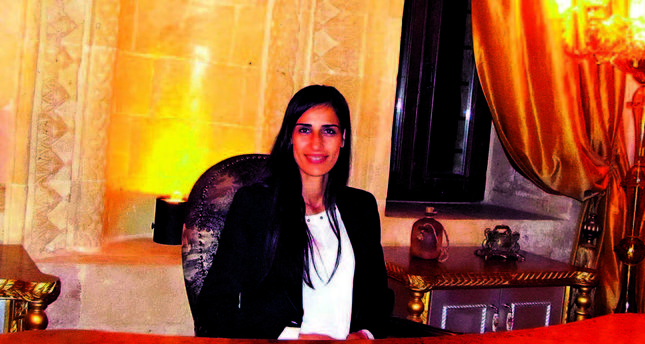 Daily Sabah conducted an interview with Februniye Akyol, the young female Syriac appointed by BDP as joint mayor for the metropolitan municipality of Mardin following the recent local elections

MARDİN — Twenty-five-year-old Februniye Akyol was born and raised in a Syriac family in Mardin's Midyat. She was not active in politics before the Peace and Democracy Party (BDP) proposed her as a candidate to attract the attention of minorities and to declare itself as a comprehensive party. Although she was criticized for being appointed by Abdullah Öcalan, head of the Kurdistan Workers' Party (PKK), and not being the people's preference directly, her step into politics as a young female was praised by several social and political groups.

Daily Sabah also spoke to Hafize Aymelek who was appointed as candidate before Akyol but was replaced by a demand from Öcalan.
Aymelek is positioned as a municipality board member.

- Congratulations on your new position. Properties belonging to minority groups have started to be returned to their rightful owners. How do you evaluate this development?

Februniye Akyol: It happened after many legal struggles. A case was filed in 2008. We struggled for six years for this.

- These regulations started as a part of the fourth democratization package?

Since it is very popular, the press placed special attention on the Mor Gabriel Monastery.

However, there are many other cases that have been filed by Syriacs.

- Exiled Kurdish politician Yaşar Kaya (one of the founders of the pro-Kurdish Democracy Party (DE P)) returned to Turkey after 21 years with the guarantee of a trial without arrest. What does the Kurdish diaspora think about this?

FA: The reconciliation process has been a unilateral struggle. However, seeing that the necessary steps have started to be taken by the government is still promising, despite its slowness.

- Do you think the government has not keep up its end of the reconciliation process?

However, our friends (the Kurdish Communities Union (KCK) detainees) have been released, and the Specially Authorized Courts have been abolished… et cetera.

These are of course very promising developments.

- Do you think that the Syriac diaspora would return following the reconciliation process?

FA : The government calls on them to return but does not do the ground work for returnees. When they come back, they find neither their homes nor properties.

Their houses have been demolished or preyed upon.

- There is some criticism of the joint mayor project, saying that it does not have a real function; it is only a showpiece. What would you say against this criticism?

FA : I consider this criticism as a meaningless argument just to create a false agenda. This project did not just pop up.

Previously, the BDP had a 40 percent female rule. Now we call it equal gender representation.

The number of female representatives must be equal to men's because life does not consist of only the one sex.

- What do Syriac people expect from the reconciliation process?

FA: I believe the current developments are very belated. As Syriac people, we are given the right to represent ourselves only by the BDP, only by Kurdish people.

I stand here as a proof of the BDP's sincerity regarding its motto as a political party representing all the people. Öcalan himself suggested my candidacy.

All Syriacs want to gain their basic rights. They do not want to be oppressed.

They want to live freely with their own identity.

Here, we have such a harmonized society.

Until my candidacy, Kurds or Arabs who have Syriac relatives were ashamed of confessing this. They generally had a tendency to conceal it as much as possible.

But after I was elected, they started to confess it by saying things such as, "My grandmother was also a Syriac," et cetera.

We raised this awareness. I was elected in a district with no Syriac, no Christian residents.

People needed this change; they had been expecting it.

- In his Nevruz letter, Abdullah Öcalan praised the stability of democracy in Turkey and said it is a solid base for reconciliation.
Previously, Erol Dora, the BDP Mardin deputy in Parliament, said Turkey must remain as a single state. However, there are other voices raised inside the party pointing to guns and a separate state as a solution. Does the BDP have an internal conflict regarding its reaction towards the state and the reconciliation process?

FA: This is not a conflict. Everyone inside the party knows what is really happening.

All we want is to freely exist with our natural identity.

- The government has already taken some steps regarding freedom of language and religion...

FA : No, not only those. What we want is democratic autonomy. We are already against the state and its centralized administration.

- There are some historical wrongs, and the government claims it is rectifying some regulations and laws.

FA: As people, we do not feel any better.

Currently, there are properties whose deeds have been transferred to other people or to the Department of the Treasury.

These have not yet been returned.

- So are you promising to solve all such problems once democratic autonomy is adopted?

FA : The state should take some steps regarding the territorial problems of its people. We do not have any authority on land as a municipality. We only promise them that the people will rule the city with them.

The Syriac people of this region have suffered greatly. Their villages had been evacuated; people had been forced to emigrate.

Is this an act of the state alone? No, the Kurdish people also caused suffering to Syriacs for certain periods of time, but the Kurds are now criticizing themselves.

- Do you not think this is also the case for the state? Does the state not criticize its wrongdoings today?

FA: No, it does not. Who recognizes the Syriac people in the real sense? Yes, the state recognizes Syriacs to some extent.

What does the BDP do here? It gives Syriacs the right to represent themselves.

- There is some criticism that says the BDP remains too regional as a political party and has no vision apart from ethnic politics. What would you say against that?

FA: I have never heard such an argument.

If there were, I would say check the BDP's candidates and check the people's pulse. As a Syriac, I do not agree with the criticism.

- So are you saying that the BDP has policies towards other ethnic groups of Turkey such as the Laz and Albanians and Circassia?

Hafize Aymelek: Prejudice against the BDP has not allowed the party to express itself. From the outside, the photo seems blurred, but as you get closer, the photo becomes clearer.

FA: We do things differently. We traveled from village to village as part of our electoral campaign. We say the people should rule us, lead us towards the real problems. If there is need for infrastructure in a district, we will provide it. Ruling the city along with the people is what we call democratic autonomy.

- Aren't you already able to do the things you promise in the current situation, without democratic autonomy, without a special arrangement of law or permission?

FA : The joint mayor system needs a special legal arrangement. Formally, I cannot be the joint mayor. But we put it in action, and we will keep it that way.

- BDP members of Parliament have joined the Peoples' Democratic Party (HDP). Do you think being palsy-walsy with the Turkish left is helpful to the reconciliation process?

FA : Joining the HDP does not mean being palsy-walsy with leftist groups. We should not think narrow-mindedly. Although the BDP has never stuck only to the Kurdish issue, the party could not move beyond people's perceptions. But the HDP is more extensive, an umbrella party.

- Does that mean the BDP accepts the criticism regarding its lack of national reach?

FA : No, it does not; however, this perception is considered to pertain to the Kurdish people's party alone.

- Has the BDP ever nominated a candidate in Trabzon for example?

HA: Party candidates are chosen according to voters' tendencies.

- So do you believe that the BDP cannot produce a policy that embraces Turkey as a whole?

HA: Due to some obstacles, the BDP cannot communicate with certain regions of Turkey.

- What policies of the BDP targeting the Black Sea or Aegean regions of Turkey remain unanswered by the public?

HA: We do not consider democratic autonomy as just a regional regulation.

If they need it, people living in the Black Sea or Aegean regions of the country can adopt this regulation. This is the project of the century.

- How do the Kurdish people feel about the BDP-HDP union?

HA: The Kurdish people do not have a problem with it. No one in Turkey is ever always happy anyway.

- Lastly, as the new joint mayor, what are your concrete projects for the city of Mardin?

FA : Primarily, we want to build an international congress center. Mardin is in a strategically important location. We are planning to build a sports complex. We want to establish public houses, public assemblies in every neighborhood by which we can rule the city with the citizens. We want to provide what the public really wants; we do not want to implement predetermined projects.

Besides these, there is the BDP's joint mayor project that aims to include women in every aspect of life and enable them to be as active as possible. We will establish cooperation houses for women in order to raise awareness.
RELATED TOPICS