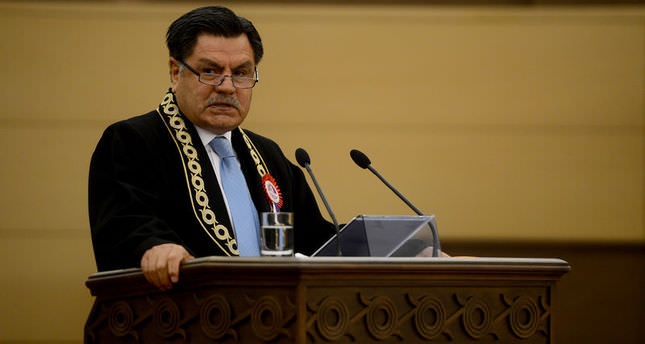 In line with universal legal principles that prevent comments or criticism of judicial verdicts during the judicial process, Erdoğan, as a politician, criticized the AYM's verdict after it was issued. Facing the criticism, Kılıç responded to Erdoğan by saying, "Courts speak with their verdicts." Yet, Kılıç's highly politicized remarks at Friday's ceremony were interpreted as a contradiction to his previous response.

Denouncing "excessive" political criticism of his tribunal, in a defiant challenge to Prime Minister Erdoğan, who criticized recent court rulings, Kılıç stated that the judiciary is not in a position to trap the nation's will but recently there have been harsh and heavy criticisms against the judiciary.

Describing the judiciary as conscientious, Kılıç pointed out that the AYM acts according to the principles of the Constitution and international law and outside of any discrimination.

Kılıç said: "The judiciary, which uses public force effectively, has always been seen by political and ideological structures as a fortress that needs to be captured, and those who captured it tried to place the judiciary under their tutelage. Those who cannot capture it, on the other hand, always speak about the independence of the judiciary. I am saying with a capital letter that as long as this understanding does not change, the judiciary cannot be independent." "This time, we [Turkey] have witnessed a different tutelage. No one should try to detach himself from this new tutelage's fault. We need to speak about it, confess it and find a solution," he said.

Referring to the "parallel state" notion that is used to define Gülenists infiltrating the police and judiciary, Kılıç further said the judiciary has been targeted with parallel state allegations and that judicial independence is not possible as long as it must face them.

On Erdoğan's criticism after the AYM's lifting of the Twitter ban, Kılıç stated that the AYM is criticized intemperately with political concerns due to its verdict concerning a social media platform. "To say that the Constitutional Court acts with a political agenda or to blame it for not being patriotic is shallow criticism," said Kılıç, adding that the judiciary would leave these criticisms and challenges without a response since the judiciary is aware of the economic, social and political damage that those tensions may bring. Yet, his politicized remarks raised a question as to what extent he left these criticisms without response during his Friday speech.

In a sarcastic way, Bozdağ criticized the anti-government approach and harsh remarks of Kılıç by saying, "The AYM president's statements show that there is a new opposition party in Turkey to fill the gap of other opposition parties."

Çiçek pointed out that opening ceremonies have become a place for slamming and accusing invited politicians, as if everything was perfect in the country, except politics. "Nobody [participants] went there [constitutional court's anniversary] to be slammed or reprimanded.

The law requires delicacy, and judicial authorities should speak gently; but unfortunately, we could not experience it there," said Çiçek, highlighting that he is disappointed.

The next reaction came from Justice and Development Party (AK Party) Vice Chairman Mustafa Şentop who said he found Kılıç's statement "very inappropriate and shallow" and added, "He should take off his judge's gown and step into politics."

Speaking to Daily Sabah, Law Professor and AK Party Central Decision and Administration Board (MKYK) member Osman Can stated that Kılıç's discourse was problematic during his speech. He said: "His speech is contradictory. On the one hand, he says we are determined to leave the criticism without response; on the other hand, he gives baseless and shallow criticism. These are not remarks that a Constitutional Court president is supposed to make, considering legal principles. Constitutional Courts may criticize politicians, but courts cannot be politicized."

When asked whether Kılıç's speech politicized the judiciary, Can pointed out that all of the opening ceremony speeches are politicized to a certain extent even though it includes statements such as the independence of judiciary. "We cannot say that the AYM is politicized, but his remarks are quite politicized.

In every opening ceremony, AYM presidents gather politicians and criticize them. This kind of practice is problematic and Turkey should discuss the practice of the opening ceremonies," said Can.