Philippines agree to increase U.S. military presence on soil for next decade 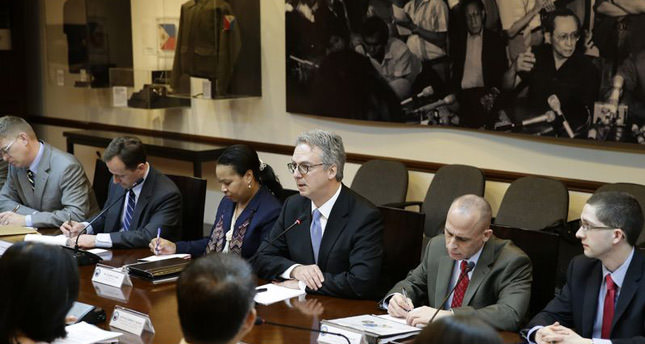 by Apr 27, 2014 12:00 am
MANILA — The Philippines and the United States announced they would sign an agreement on Monday to allow a greater U.S. military presence on Filipino soil for the next decade. The deal will be signed in Manila a few hours before U.S. President Barack Obama is due to arrive for a two-day visit to the Philippines, one of the United States' most loyal but militarily weakest Asian allies which is embroiled in an increasingly hostile territorial row with China.

U.S. officials in Malaysia travelling with Obama said on Sunday the agreement would be inked between the two nations, which are already bound by a pact to come to each other's aid if attacked and engage in regular war games together.

Evan Medeiros, senior director for Asian Affairs on the National Security Council, said the deal was a "skeletal and muscular" framework that would allow the two sides to discuss more rotations of U.S. troops, naval visits and training exercises.

He said it was "the most significant agreement that we have concluded with the Philippines in decades".
It is also another part of Obama's much-publicised strategic and military "pivot" to Asia.

The deal with the Philippines comes in the month before the United States sends 1,150 Marines to Australia to bolster a roughly 200-member force already in Darwin. Those U.S. troops are part of a deployment that will see a garrison of up to 2,500 by 2016-2017, in another prong of the rebalancing strategy. U.S. officials said the exact composition of US forces to be rotated through the Philippines remained to be worked out.

"The scope, the duration and the location of our rotational presence in the Philippines is something that we are going to be working out with them in the coming weeks and years," said Medeiros. But U.S. officials said the agreement would last for 10 years, with provision for renewal. They said it would be signed by the Philippine Minister of Defence and U.S. ambassador to Manila Philip Goldberg.

The Philippine government released a short statement on Sunday saying the agreement would be signed, without giving details.
But Filipino negotiators had previously said it would allow more U.S. troops, aircraft, and ships to pass through the country.
It would also allow the United States to store equipment that could be used to mobilise American forces faster -- particularly in cases of natural disasters. The deal would not allow Washington to establish a permanent base or bring in nuclear weapons, according to the Filipino negotiators.

The Philippines had been pushing for the agreement to help bolster its military as it engages in an increasingly tense row with China over rival claims to parts of the South China Sea. But Medeiros dismissed the notion that Washington saw the agreement through a prism of containing China's rising military might.

The Philippines hosted two of the largest overseas U.S. military bases until 1992, when the Filipino Senate voted to end their lease amid growing anti-U.S. sentiment. President Benigno Aquino has led a warm re-embrace of the United States in recent years, insisting that greater U.S. military support is needed to fend off China's actions.

China claims most of the South China Sea, even waters close to the Philippines and other countries in the region. Brunei, Malaysia and Vietnam, as well as Taiwan, also have overlapping claims to the sea. The Philippines has protested repeatedly at what it says are bullying tactics by China in staking its claims, including by taking control of a shoal far closer to the Filipino land mass than the Chinese.

Chinese ships also last month tried to block vessels bringing supplies to a Philippine military outpost on a tiny reef claimed by China.
The Philippines has angered China by asking a United Nations tribunal to rule on the validity of China's claims to the sea. China has refused to take part in the case, and said the Philippines' move had "seriously damaged" bilateral ties.
Last Update: Apr 27, 2014 4:57 pm
RELATED TOPICS