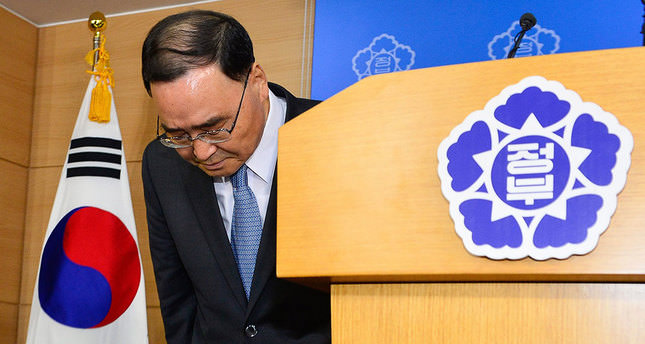 by Apr 27, 2014 12:00 am
SEOUL — South Korean Prime Minister Chung Hong-won announced his resignation on Sunday over the government response to the ferry disaster, in which it was first announced that everyone had been rescued, focusing attention on poor regulatory controls.

The Sewol ferry sank on a routine trip south from the port of Incheon to the traditional holiday island of Jeju on April 16.

More than 300 people, most of them students and teachers on a field trip from the Danwon High School on the outskirts of Seoul, have died or are missing and presumed dead.

The children on board the Sewol were told to stay put in their cabins, where they waited for further orders. The confirmed death toll on Sunday was 187.

South Korea, Asia's fourth-largest economy and one of its leading manufacturing and export powerhouses, has developed into one of the world's most technically advanced countries, but faces criticism that regulatory controls have not kept pace.

As part of the investigation, prosecutors raided two shipping safety watchdogs and a coastguard office. They have also raided two vessel service centers, which act as maritime traffic control.

Chung's resignation has to be approved by President Park Geun-hye, who has the most power in government.

"Keeping my post too great a burden on the administration," a somber Chung said in a brief announcement. "...On behalf of the government, I apologize for many problems from the prevention of the accident to the early handling of the disaster.

"There are too many irregularities and malpractices in parts of society that have been with us too long and I hope those are corrected so that accidents like this will not happen again."

Chung was booed and someone threw a water bottle at him when he visited grieving parents the day after the disaster. President Park was also booed by some relatives when she visited a gym where families of the missing were staying.

Tempers have frayed over the slow pace of the recovery and frequent changes in information provided by the government.

The Gyeonggi Provincial Office of Education sent text messages to parents that "All Danwon High School students are rescued" in the hours after the disaster, media reported.