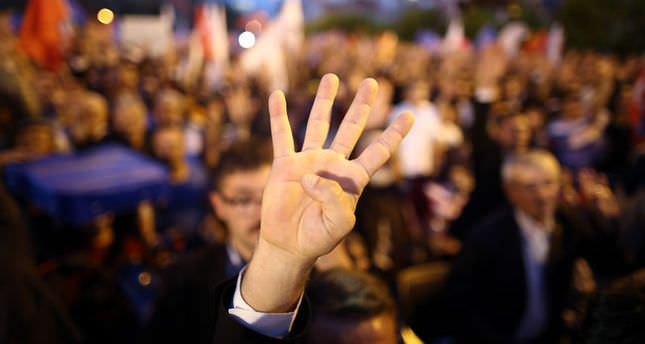 by AA Apr 30, 2014 12:00 am
ISTANBUL — Turkish NGOs organized protests across Turkey to demonstrate against the Egyptian coup regime's death sentences. An Egyptian court's decision to sentence 683 Muslim Brotherhood supporters to death caused mass protests across Turkey on Monday. The Platform of Solidarity, consisting of Egyptians and numerous Turkish NGOs, held demonstrations in many cities in Turkey to protest the court's ruling in the Egyptian province of Minya on Monday to sentence 37 Morsi supporters to death and 491 to life sentences.

Members of Turkey's IHH humanitarian relief foundation and other organizations along with Egyptians living in Turkey gathered in front of the Egyptian consulate in Istanbul and projected ousted President Mohammed Morsi's photo and the Rabaa symbol onto the consulate building.

Protesters on board boats near the consulate with Syrian, Egyptian and Palestinian flags and posters of Morsi unfurled banners saying, "Will the world keep quiet against this cruelty?" "Get out Sisi, we are with you, Morsi" and "Junta's death sentences cannot appall Islamic resistance." Former Egyptian deputy Adil Rasit stated that one person who received the death penalty had, in fact, died three years ago.

The deputy said he wondered if the judge who issued the sentences even analyzed the names presented to him or if he knew that one person sentenced was already dead. Members of the Anatolian Youth Association (AGD), an association for unity and fraternity of youth in Turkey, also rallied in the Fatih district of Istanbul against the mass death sentences.

The AGD Istanbul branch chairperson, Ali Uğur Bulut, stressed that the death sentences are unacceptable, saying, "Every sensible person is aware that these penalties are not based within a legal framework." NGOs held demonstrations in 15 Turkish cities including the capital city of Ankara, and Antalya, Sivas, Yalova, Bolu, Kocaeli, Kahramanmaraş, Şanlıurfa, Düzce, Burdur, Adıyaman, Konya, Amasya and Afyonkarahisar.

Loğoğlu added that the sentences do not bring peace to the country and only create deep wounds. Egypt's military-backed authorities launched a massive crackdown on the Muslim Brotherhood after Morsi's ousting by the military last July. In the nine months since, thousands of the group's members and sympathizers have been arrested and convicted on multiple charges.