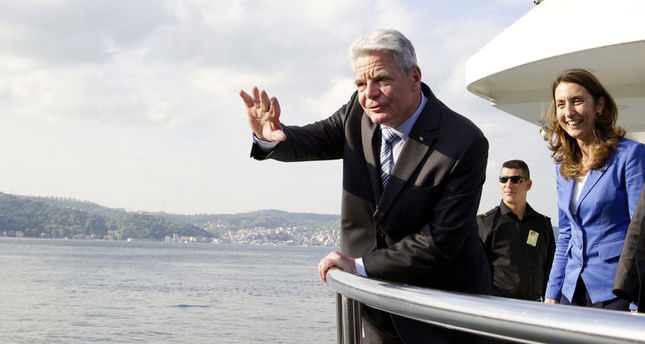 by daily sabah
Apr 30, 2014 12:00 am
ISTANBUL — German President Joachim Gauck recently visited Middle Eastern Technical University (ODTÜ) following an official meeting with President Abdullah Gül at the presidential palace in Ankara. Gauck's remarks to students there greatly differed from his comments at the presidential palace when he praised Turkey on the humanitarian aid efforts provided to Syrian refugees in the country and its handling thereof.

While Gauck prefaced his comments by saying he did not intend to interfere in the domestic affairs of Turkey, he criticized the National Intelligence Organization (MİT) Law, Gezi Park incidents and a number of other topics. "We are going through a period when access to the Internet and social media networks are restricted, journalists with critical views are being dismissed and even tried and a period when newspapers face publishing bans and media organs are under legal pressure," said Gauck in his speech to an audience of students and academics at ODTÜ's Culture and Conference Center. Questioning the quality of judicial independence in Turkey, Gauck claimed the current government was trying to interfere in the judiciary and security forces in efforts to "sway public opinion," posing an imminent threat to judicial independence. However, Gauck failed to refer to the Gülen Movement. Gauck said that he was appalled by the current situation in Turkey and stated that the protests should be seen as a warning sign to the government that it cannot enforce a single ideology or lifestyle on the people. Gauck, however, failed to reference the government's countless initiatives to create an inclusive society through the introduction of a democratization package aimed at providing equal rights for people from different ethnicities, ages, beliefs, disabilities and genders.

Touching upon the issue of hate crimes in Germany by neo-Nazi groups, Gauck stated Germans were forced to accept the fact that the investigations analyzing the killing of a number of Turkish people by neo-Nazis in Germany were biased. According to a survey conducted by Liljeberg Research International in 2013, one in four Turkish people face verbal attacks on a daily basis based on their appearance.

Findings by the University of Leipzig suggest 33 percent of Germans think immigrants should be sent back to their countries, while 11 percent believe Nazi ideologies have a positive influence on Germany.

Prior to his speech at ODTÜ, Gauck criticized the Twitter and YouTube ban in Turkey and in Gül's response he referred to the killing of Turkish people in Germany by neo-Nazis. "Racism and Islamophobia are widespread in Europe," said Gül, who stated that countries should recognize their shortcomings and have a determined attitude to overcome such issues.

Moreover, Gül at the formal dinner also said he finds it contradictory that foreign representatives criticizing the situation in Turkey refuse to open the way for chapters pertaining to the judiciary, fundamental rights and freedoms in terms of Turkey's accession to the EU.

Gauck's visit was protested by a group of ODTÜ students who were denied access to his speech. His inconsistent remarks over a number of issues has raised questions among Turks, as he praised Turkey in the company of government officials, but took an opposite stance when he visited ODTÜ, a university known to have a number of anti-government supporters.