Conflict among CHP as Sarıgül appoints his own team 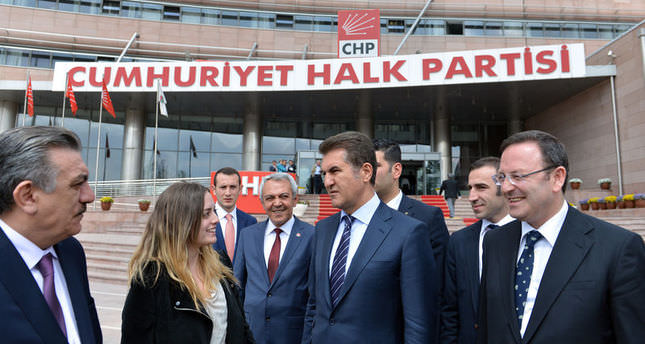 by Daily Sabah May 02, 2014 12:00 am
ISTANBUL — Following its failure in the March 30 local elections, Turkey's main opposition the Republican People's Party (CHP) is experiencing increasing internal conflict and rivalry. On Monday, a confrontation that included fistfights and shouting matches with obscenities erupted among CHP Beşiktaş district members during a meeting.

While the CHP denied that the incident took place and said the meeting was held to assess the results of the elections, reports of Monday's row showed how divided the party is.

Touching on the CHP's internal fight in his column in the Turkish daily Hürriyet, Turkish journalist Yalçın Bayer said, "A severe row among CHP members has been expected.

The row erupted in the most controversial district, Beşiktaş." The reason behind the infighting is the CHP's allegedly fake city council list, which was produced in Ankara and paved the way for the CHP's Istanbul municipality candidate Mustafa Sarıgül's own team to take the front seats in the party. It is alleged that certain groups bribed CHP district head Uğur Gedikli and changed the city council list. Gedikli was discharged from the CHP at the instruction of the party's chairman, Kemal Kılıçdaroğlu.

The CHP's former leader, Deniz Baykal, who was forced to quit as party leader in 2010 because of a sex scandal only to be replaced by Kılıçdaroğlu, has been gaining popularity once again among certain party members. Baykal's supporters, including former city and district heads Seyfi Erbaş, Hasan Bozkurter, Levent Serdaroğlu and former council member Mehmet Aslan made harsh statements against Beşiktaş district Mayor Murat Haznedar, who was supported by former Beşiktaş Mayor Sarıgül and the names that Haznedar listed in the council. Harshly criticized by Baykal supporters, Sarıgül and Haznedar were accused of placing Sarıgül's own team in Beşiktaş district posts. "Much of Sarıgül's team was appointed in Beşiktaş. Po-Sarıgüls, coming from Ordu, Fatsa and Sinop [northern cities in Turkey] were placed in the city council's first ranks. They changed the city council's list. This is a shame in politics,"
Aslan said.

During the meeting, CHP Central Executive Board (MYK) member Dursun Bulut commented on the accusation against Haznedar. Criticizing the fake city council list, Bulut said, "Former District Head Uğur Gedik was appointed as a key advisor in the municipality. If you [Haznedar] do not remove Gedik from the post, it means that you have committed a crime. It results in a referral to the discipline committee. I warn you, remove Gedik from his post immediately." Another member harshly criticized the fake city council list and bribery within the Beşiktaş municipality.He said, "I participated in the Beşiktaş municipality training course, which was given to candidates after paying TL 500 and I paid TL 2,000 to be nominated for the council.They [the municipality] told me that those who do not pay and do not take the course will not be candidates, but they did. This is robbery. I am asking: Can we call the CHP a political party now?

"Since last month, the CHP has been divided over numerous allegations and accusations regarding not only the local elections but also the party's alliance with the Gülen Movement, which infiltrated the police and judiciary with the aim of toppling the government. In April, CHP Parliamentary Group deputy leader Muharrem İnce harshly criticized Kılıçdaroğlu and the party administration for its insufficient and poor election policies. He addressed Kılıçdaroğlu, saying, "You demanded help from the right wing, as did former Chairman and Antalya Deputy Deniz Baykal, without gaining any results. Even the survey company working for us advised us to reduce the number of Kemalists in the party." The eastern city of Artvin's CHP mayoral candidate Emin Özgün in April said the Gülenist-CHP alliance was a major reason for the party's failure in Artvin. He stated that the Gülenist-CHP alliance caused some concern at the party's grassroots level and led to a loss of support. Elected as mayor for three consecutive terms, Özgün said, "They [Gülenists] came to me ahead of the elections and told me that their 1,000 voters would vote for me. I accepted." On April 1, Deniz Baykal accused the party leadership of making "crazy mistakes." Baykal, currently serving his eighth term as Antalya deputy, said, "We warned the party leadership prior to the elections: We need to learn our lessons here and build the correct mechanisms to get back on our feet. The party is in need of renewal."

This is not the first time that the CHP has been divided by internal conflict. In 2004, internal rivalry and conflict within the CHP began when Mustafa Sarıgül and Deniz Baykal had a dispute, which resulted in Sarıgül's resignation after numerous accusations of corruption and abuse of authority. Sarıgül's nomination as the CHP's Istanbul Metropolitan Municipality candidate for the recent March 30 local elections is considered to be the issue that reignited the internal conflict.