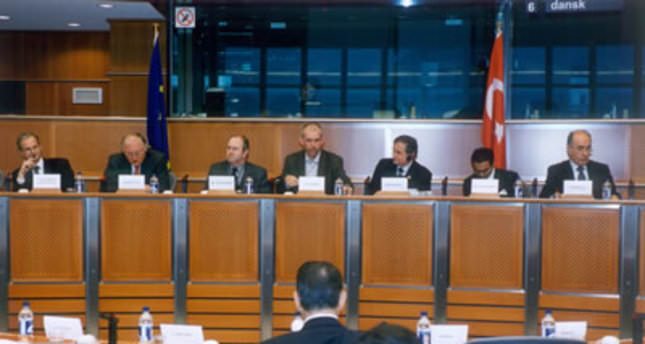 by Daily Sabah May 02, 2014 12:00 am
ANKARA — Co-chair of the Turkey-EU Joint Parliamentary Committee (JPC) Afif Demirkıran sent a letter to the president of the European Parliament, Martin Schulz, and urged Europe to act against the mass death sentences ordered by an Egyptian court. The Minya Criminal Court of Egypt announced on April 28 that the previous death sentences issued to 37 people out of 529 would hold.This brings the total number of death sentences for Muslim Brotherhood supporters to 683. In his letter, Demirkıran noted that he and his co-chair of the Turkey-EU JPC, Helene Flautre, stated in an earlier letter to the Egyptian interim authorities that the death penalty is cruel and inhumane, fails to act as a deterrent and represents an unacceptable denial of human rights. "These sentences undermine the right to a fair trial and the right to life and clearly violate the fundamental rights and freedoms cherished in the Universal Declaration of Human Rights,"Demirkıran remarked.

He underlined that the international community, who supposedly is the defender of these universal principles of law and human rights, should react accordingly to the unacceptable decision. "I very well know that the European Parliament, representing 500 million citizens, has a powerful voice especially when it comes to democracy, the rule of law and human rights, the values on which the EU is founded. We need to continue to urge the Egyptian authorities to reassess these decisions which undermine the return to democracy in Egypt, and to encourage taking steps in line with the Egyptian people's expectations of justice and peace expeditiously," Demirkıran added.