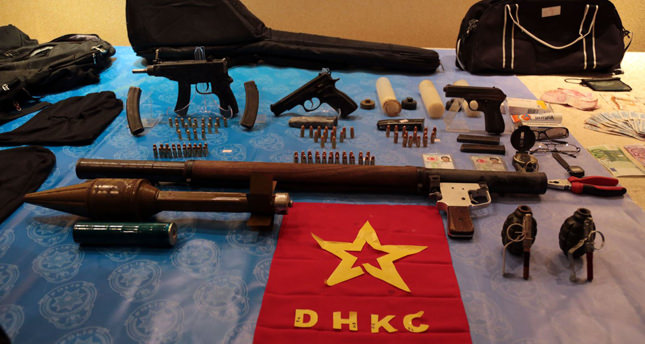 by Daily Sabah May 02, 2014 12:00 am
ISTANBUL — The State Department issued its annual Country Report on Terrorism and its section on Turkey cited the Revolutionary People's Party-Front (DHKP-C) as a major security threat to both Turkish and U.S. interests in 2013.

The report said Turkey faced significant terrorist threats in the past year and "took strong action in response."
According to the report, the DHKP-C, a terrorist Marxist-Leninist group with anti-U.S. and anti-NATO views that seeks the violent overthrow of the Turkish state, threatened the security of Turkey and the U.S. including through a suicide bombing at the U.S. Embassy in Ankara in February 2013 that killed a Turkish guard.

The report also noted that the terrorist PKK organization ceased its activities in 2013 following the launch of a reconciliation process between Turkey and the Kurds to restore the rights of the oft-neglected community.

The report said Turkey increased its cooperation with European countries regarding the status of members of the DHKP-C. Hüseyin Fevzi Tekin, a senior leader of the group, was arrested in neighboring Greece in February, along with other members. However, a Greek court rejected Turkey's demand for Tekin's extradition.

The report noted that there were large-scale investigations and detentions in 2013 of over 200 individuals thought to be associated with the DHKP-C.

The State Department report also said Turkey is a longstanding counterterrorism partner of the U.S. and co-chaired the Global Counterterrorism Forum (GCTF) with it.

The report also refers to the Syria-based group Mukaveme Suriyyi (Syrian Resistance) led by Mihraç Ural, a former leader of the DHKP-C. It noted that Turkish authorities believed the group was behind the two largest terrorist attacks of 2013 in Turkey -- a car bombing at a border crossing with Syria in February 2013 that killed 13 people and twin car bombings in the southern province of Hatay's Reyhanlı district in May 2013 that killed 52 people.

According to the report, the DHKP-C has several dozen members inside Turkey, with a support network in Europe. It primarily operates in the major Turkish cities of Istanbul, Ankara, İzmir and Adana, while its many members live and plan operations in European countries.

It notes that the organization finances its activities chiefly through donations and extortion and raises funds primarily in Europe.

Founded in the late 1970s as a Marxist-Leninist party, the DHKP-C was designated a terrorist organization by Turkey, the U.S. and the E.U. Under the name of Dev Sol until 1994, the organization claimed responsibility for a series of high-profile murders, including the assassination of two politicians in 1980. The group also killed several Turkish intelligence officials. In 1994, it became the DHKP-
C after Dev Sol splintered. The group's terror activities remained relatively minor compared to the PKK, another terrorist organization targeting Turkey, but it attempted to make a comeback in recent years by exploiting mass protests to launch attacks against security forces.

Turkey brought its counterterrorism laws more in line with European Union freedom of expression standards and narrowed its definition of terrorism propaganda, for example, so as to not automatically deem people publishing declarations of an illegal organization as members of the organization, according to the report.

The report praised the Turkish National Police for "highly developed" counterterrorism capabilities and plans to expand its law enforcement training to other countries.

In efforts to eradicate terrorism, the report refers to programs Turkey adopted to counter radicalization and violence, including a police outreach program to prevent recruitment of the youth by terrorist organizations.